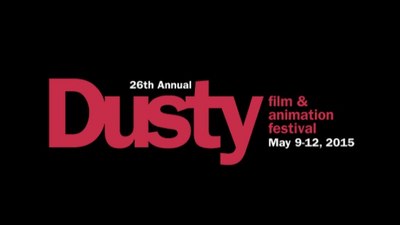 Organizers of the 26th Dusty Film & Animation Festival have announced that this year’s event will be held in New York City, Saturday, May 9 through Tuesday, May 12, 2015. The four-day event, produced by independent producer/filmmaker and SVA faculty member Annie Flocco, will showcase more than 100 films and animations from students graduating this spring.

The 2015 Dusty Festival kicks off with three days of film and animation screenings, and concludes with an awards ceremony on May 12. Fifteen awards -- including Outstanding Film and Achievement in Directing, Outstanding Documentary, Outstanding Animated Film, and the New York Women in Film & Television Award -- are given to students in recognition for outstanding thesis work. All festival screenings are free and open to the general public and take place at the state-of-the-art SVA Theatre, located at 333 West 23rd Street, NYC. The final list of presenters and special guests will be made public at a later date.

“We are thrilled the Dusty Film & Animation Festival is celebrating its 26th year,” says Reeves Lehmann, chair of the BFA Film & Video and BFA Animation programs at the School of Visual Arts. “We invite everyone to come and discover the next generation of great filmmakers and animators, who we know will entertain and educate audiences near and far.”

This year, SVA will present Dusty Outstanding Alumni Awards to producer/director Daniel Minahan (Game of Thrones, True Blood, Marco Polo) and animator Alex Kupershmidt (The Lion King, Lilo & Stitch, Frozen), announced Reeves Lehmann and Annie Flocco. The awards will be handed out at the Dusty Awards, Tuesday, May 12, 2015 at 6:30pm at the SVA Theatre. “We’re tremendously proud of the work that Dan and Alex have done since they got their start at SVA,” says Lehmann. “They’re also role models for the artistic community in supporting young talent.”

The Dusty Film & Animation Festival was established with the mission of introducing films made by students in the BFA Film & Video and BFA Animation programs to a wider audience, and was named after SVA Founder Silas “Dusty” H. Rhodes.

“Our festival receives industry-wide recognition and is considered one of the top student film festivals in the country,” Flocco comments. “Filmmakers who got their start at SVA include alumnus and Academy Award nominee Jeremy Dawson (MFA 1993 Photography, Video and Related Media), who produced the Wes Anderson-directed The Grand Budapest Hotel; past BFA Film & Video student Morten Tyldum, Academy Award nominee for Best Director for The Imitation Game; and, Academy Award nominee Daisuke “Dice” Tsutsami (BFA 1998 Illustration), who co-directed The Dam Keeper.”

BFA Film & Video and BFA Animation alumni have received accolades from the Academy of Motion Picture Arts and Sciences; Sundance Film Festival; New Directors/New Films; International Animated Film Festival in Annecy, France; American Film Institute; Women in Film; and the National Board of Review, among many renowned institutions and organizations.