10 months after deadly arson attack that killed 36 people, suspected murderer Shinji Aoba has recovered sufficiently from his own injuries to be taken into custody. 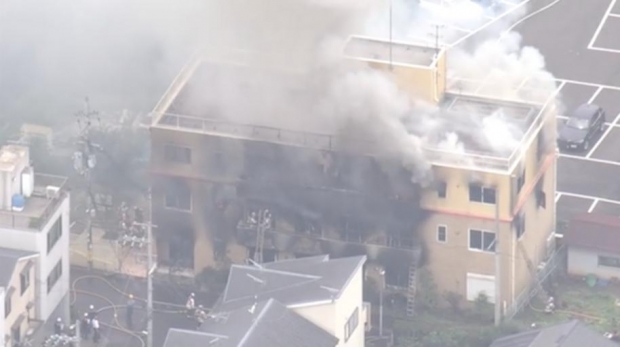 10 months after the deadly July 18, 2019 arson attack at the Kyoto Animation Studio that left 36 people dead and 33 injured, police have finally arrested their chief suspect, Shinji Aoba, according to a Japan Times report. Aoba, who suffered severe injuries in the attack, had been hospitalized in critical condition after being found near the studio. He has supposedly admitting his role in the massacre, telling police there was “no mistake” in the allegations against him.  Finally judged sufficiently recovered to be charged, Aoba was arrested Wednesday on suspicion of murder, arson, and other offenses. He is being questioned at a Kyoto police station after being transferred there on a stretcher.

Responding to the arrest, Kyoto Animation said in a statement, “We have nothing to say to the suspect … Our fellow workers whose lives were lost will never come back and the wounds of our colleagues will never be healed.” A studio legal representative stated they expect the suspect to face “maximum criminal responsibility.”

At the time of the attack, 70 people, mostly young women, were at work in the three-story animation studio. Police have said the attacker entered the building and splashed gasoline from a bucket before setting it ablaze and shouting, “Die!” Most of the fire’s victims were found collapsed on a third-floor stairway as they tried to escape to the roof. According to the Kyodo news agency, that door was shut, fatally trapping people trying to flee the inferno.” People who witnessed Aoba’s arrest said they heard him complaining that the studio had stolen his novel.

Founded in 1981 and also known as KyoAni, the well-respected studio is noted for films such as A Silent Voice (2016) and Liz and the Blue Bird (2018), as well as the series Violet Evergarden.  The studio’s most recently completed film, Violet Evergarden: The Movie, was scheduled for theatrical release in Japan this past January 10 but was rescheduled for April 24. With cinemas closed due to the coronavirus outbreak, no new release date has been set.