From the makers of ‘Robot Chicken,’ season one of Crackle’s stop-motion animated super hero series debuts on digital October 10 and DVD October 11. CULVER CITY, CA – Sony Pictures Home Entertainment has announced the uncensored edition of Crackle’s edgy animated comedy-adventure, SUPERMANSION: SEASON 1, debuting on digital Oct. 10 and DVD Oct. 11. Featuring cutting-edge stop-motion animation, SUPERMANSION follows the League of Freedom, a group of hapless superheroes who are fighting to stay relevant in a changing world. Led by their aging leader Titanium Rex, voiced by four-time Emmy Award winner Bryan Cranston (TV’s Breaking Bad), the League of Freedom live together in a mansion and work together battling evildoers, government funding restrictions, modern technology and their own personal demons. All 13 uncensored episodes of SUPERMANSION: SEASON 1 will be available in a two-disc DVD set and for digital download.

Titanium Rex (voiced by Bryan Cranston) is an aging superhero who has long been the head of the League of Freedom, a once-proud assembly of superheroes that isn’t what it used to be. The irritable Titanium Rex finds himself playing mentor to a new crop of Millennial-aged heroes who have little interest in their noble profession. Much to Titanium Rex’s dismay, they’re all thrown together to live in the SuperMansion, where the young heroes learn how to harness their superpowers and fight for justice, liberty…and the need to stay relevant to society.  Also starring Zeb Wells and Keegan-Michael Key, with hilarious guest stars Seth Green, Chris Pine, Nick Kroll, Ron Perlman, Matthew Senreich and more.

SUPERMANSION: SEASON 1 is not rated. 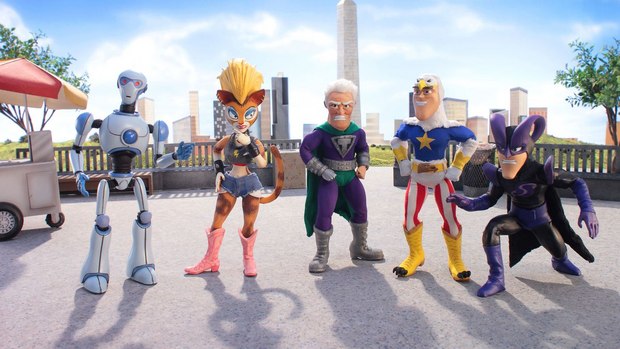