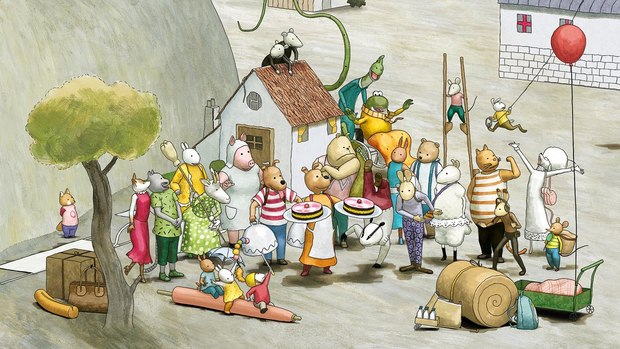 A year after its launch, Paris-based distributor Superights has inked a raft of TV sales for several titles of its kids portfolio.

Besides, the multi-award nominated preschool series Picnic With Cake (13x5’ and a 26’ special) has been sold to RTS (Switzerland), RTP (Portugal) and Ceska Televize (Czech Republic). Created by Vincent Bal and Colette Bothof, Kika & Bob follows Kika, a gutsy nine-year-old girl, and Bob, a not too clever but kind-hearted fireman, as they travel the world with one goal: to go back home and save Tiger, Kika's kitten and best friend. In each episode, Kika and Bob visit a different country, meet strange people and even stranger animals. But each time they face a dilemma or have a difficult choice to make, they can ask for the voice over's and/or the viewers' help.

Produced by Submarine, Walking the Dog and Tomavistas with the participation of The Dutch Cultural Media Fund, Picnic With Cake is an animated series and cross-media adaptation of the famous eponymous picture book by Thé Tjong-Khing. Each episode tells the same central storyline (i.e. the journey to the picnic spot, the discovery of the stolen cakes, the unmasking of the thieves and the happy ending) but from the perspective of different character. Thus, the series takes the shape of a thriller, a slapstick or a romantic comedy, all tailored to the level of understanding of targeted viewers.

“We are delighted to include Kika & Bob to our programming offer since this out-of-the-ordinary series is a great mix of fun and educational content, which perfectly fits the ‘smart fun’ positioning of Discovery Kids. It will definitively be a great addition to our line- up,” says Sarah Kwek, Programming Manager at Discovery Networks Asia-Pacific. “Kika & Bob have found a home in 74 countries but their tour is not finished yet! As far as Picnic With Cake is concerned, we are thrilled this stunning series has been acquired by most of European public channels who will give it a special programming treatment in the coming months.”

Launched in May 2013, Superights distributes quality family and children's programs. Headed by Morgann Favennec (former Head of Children's Programs at French terrestrial channel M6), the company embraces worldwide sales for animation and live-action programming acquired from the best producers throughout the world.