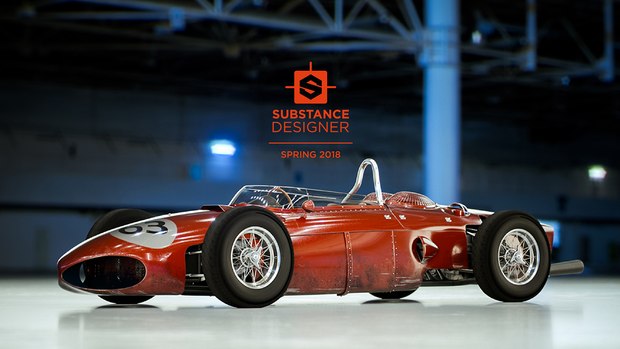 CLERMONT-FERRAND, FRANCE -- Allegorithmic has released a new update to Substance Designer engineered to take on the high-res workflows of professional VFX artists. With the introduction of UDIM support, the process of texturing large meshes will now be faster and easier than ever, bringing Substance Designer’s node-based, material authoring capabilities to a wider audience.

Several major VFX houses have been developing workarounds for Substance Designer, waiting for UDIM support to become an official part of the product. Now, the heavy assets favored by film artists can be outfitted with 8K textures designed from scratch or through scan processing tools, using a seamless workflow that fits right into their pipelines.

Since VFX is a demanding workflow, Allegorithmic has strengthened the entire program to match its needs, introducing new performance improvements and increased speeds of up to 30 percent when working with big graphs. Substance Designer’s 3D View has also been upgraded, improving high-poly mesh loading times, and making each view better looking and faster to access.

“Our new release process has allowed us to tackle bigger projects on a faster timeline, and this time we really went for the moon,” said Allegorithmic Founder and CEO Dr. Sébastien Deguy. “By opening up UDIM workflows, we are not only responding to the VFX artists that need them, but the broadcast and commercial artists working on 4K workflows. Now, each user can get what they need out of the toolset, whether that’s today, tomorrow or a year down the road.”

As Substance fans have come to expect, the latest update will also launch with nine new nodes, including one for 3D noises and another for 3D projection/selection tools. The Baker panel also gains a new 2D viewer, allowing artists to check their work with high-res previews.

The new version of Substance Designer will be on display at GDC 2018 in Allegorithmic’s booth, #1709, in the Moscone Center South Hall. To see a demo or schedule a meeting, please email contact@allegorithmic.com (link sends e-mail).