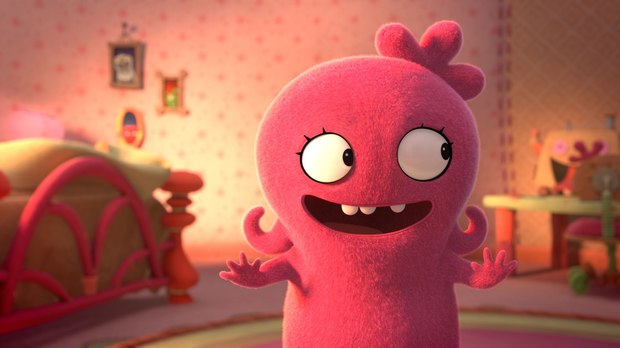 UglyDolls starts out in the adorably different town of Uglyville, where weird is celebrated, strange is special and beauty is embraced as more than simply meets the eye. Here, the free-spirited Moxy (voiced by Clarkson) and her UglyDolls friends live every day in a whirlwind of bliss, letting their freak flags fly in a celebration of life and its endless possibilities, occasionally looking to the sky, where a new UglyDoll will appear and be embraced by the community:

Moxy loves her square-peg life in this round-hole town, but her curiosity about all things leads her to wonder if there’s something -- anything -- on the other side of the mountain which nestles Uglyville. Moxy gathers a group of her closest friends and sets off to find what’s on the other side. They discover another world -- Perfection -- a town where more conventional dolls are trained in protocols before they graduate and are sent to the “real” world to find the love of a child.

In Perfection, Moxy and her crew are subject to the manipulations of Lou (Jonas), the perfect doll in charge of training recruits. Here, the UglyDolls will confront what it means to be different, struggle with their desire to be loved, and ultimately discover that you don’t have to be perfect to be amazing because who you truly are is what matters most.

Watch the trailer in the player below:

Created as a plush toy line by David Horvath and Sun-Min Kim, the UglyDoll brand quickly gained a cult following around the world and was named Toy of the Year by the Toy Industry Association in 2006. Beloved by children, teenagers and adults alike, UglyDoll characters are distinct for their endearing “ugliness,” in a wonderful “uglyverse” where differences are celebrated and embraced.

STXfilms will release UglyDolls in theaters on May 10, 2019 as launch vehicle for STX Entertainment’s UglyDolls franchise. An animated kids series is also underway with a full series order from premium streaming service Hulu, and Hasbro joined early on as global master toy licensee. The original motion picture soundtrack will be released by Atlantic Records.