Sad news as we head into 2015: András Erkel, founder of Hungary’s award-winning animation studio Studio Baestarts, has died, AWN has learned. He was 52. The report comes via VIP Licensing’s Ivanka Hahnenberger, in France, who writes that Erkel lost his fight‎ with brain cancer the evening of December 29th, passing away peacefully at his home in Budapest surrounded by his loved ones.

Born in Hungary on February 12, 1962, Erkel received his Master of Arts in Geophysics and Computer Science from the Eotvos Lorand University in 1986. He began working as a producer in 1987, launching his international career in 1990 when -- as one of the co-founders of the world-famous Varga Studio, Central-Eastern Europe’s largest animation studio -- he produced the music video, “Do the Bartman,” for The Simpsons for Klasky-Csupo and FOX.

That debut was followed by several TV and direct-to-video projects with MTV, HBO, Klasky-Csupo, Golden Books, Disney, Warner Bros. and National Geographic, among others in the U.S., and with the BBC, ITV, HIT, Nickelodeon, Cartoon Network, ZDF, WDR and Svensk Film in the U.K. and Europe.

Erkel was voted one of the world’s 40 most influential independent animation producers in 2000, going on to produce the animated Mr. Bean television series in 2001-2003. He is also known for the series Angelina Ballerina, Kipper and Horrid Henry.

A regular speaker at conferences, festivals and universities, Erkel has long been a mainstay of the animation industry. Projects he helped produce have won numerous awards, including Emmy, BAFTA, Berlin Silver Bear, and several Annecy Crystals and British Animation Awards. He was nominated for a BAFTA award in 2009 for Alexei Alexeev's series Log Jam, and in 2010 he won the Grand Prix award for best experimental short film at the 41st Hungarian Film Festival for Lena. 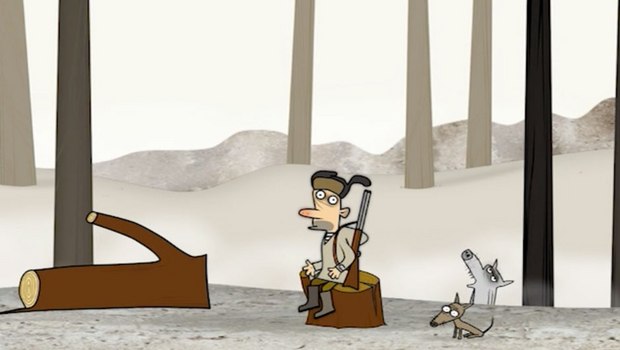 Alexei Alexeev's series, ‘Log Jam,’ produced by András Erkel and Studio Baestarts, was nominated for a BAFTA award and won the Annecy Cristal in 2009.

As a board member of CARTOON Europe, the animation association of the European Union’s Media program, in 2010 Erkel also helped organize Cartoon Forum, the largest European co-production forum for TV and emerging platforms.

Our thoughts and prayers are with Erkel’s family during this difficult time. We will be gathering remembrances and tributes to Erkel over the coming weeks for posting on AWN -- anyone who would like to participate can email info@awn.com (link sends e-mail).