Continuing their lengthy partnership, Universum Film will release the animated feature film produced by Studio 100 Media into cinemas at the end of 2016/early 2017. 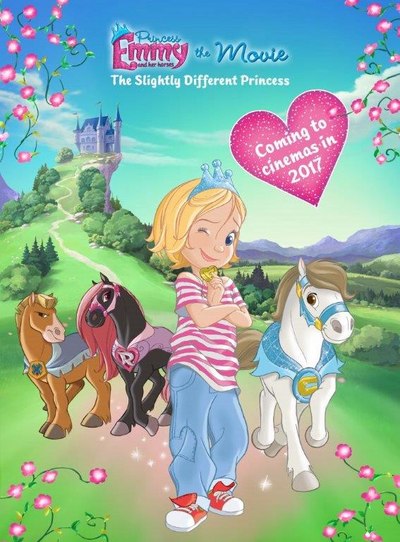 This entertaining family and children’s film is the next big collaboration for the Munich-based companies after the highly successful German animation feature Maya the Bee - The Movie last year, which was awarded the Bavarian Film Award for "Best Animated Film 2014".

Patrick Elmendorff, CEO of Studio 100 Media, who is producing the film together with Thorsten Wegener (also Studio 100 Media) states, “We are delighted to now extend our successful and comprehensive collaboration of many years with Universum Film for Princess Emmy – The Movie.”

The two producers were delighted to have Piet de Rycker on board as scriptwriter and director for this film staring the princess ‘with a difference’.  De Rycker also co-authored and directed Laura’s Star (Laura’s Stern) and The Little Polar Bear 2  (Der Kleine Eisbär 2) amongst others.

Princess Emmy – The Movie, in which Princess Emmy and her 26 horses experience their first big adventure, promises fun for children and valuable entertainment for the whole family.  This is a film about friendship, courage and a spirit of discovery.  The enchanting heroine of the Egmont Ehapa Media publishing house already excites children, particularly in her adventure books and in the magazines.

Eight-year-old Princess Emmy von Kandis has a magic secret: she can talk to horses.  On the designated Princess-Day she is set to become a member of the Royal Society.  But her self-confidence is knocked when she finds out that her extremely perfect cousin Gizana will also be appointed a Princess.  Emmy is so involved in keeping her secret, that she does not take her royal lessons with Gizana seriously enough.  As a punishment the Princess-Day is cancelled and a fight emerges between the two after which Gizana falls into great danger.  In order to save her Emmy undertakes everything, including risking her own life…

At Cannes Film Festival (13th to the 24th of May) Studio 100 Media will be located at: Stand #119, International Village – Riviera.