CGI reboot based on the original 1930’s book series written by Dorothy Wall is produced by Flying Bark Productions. 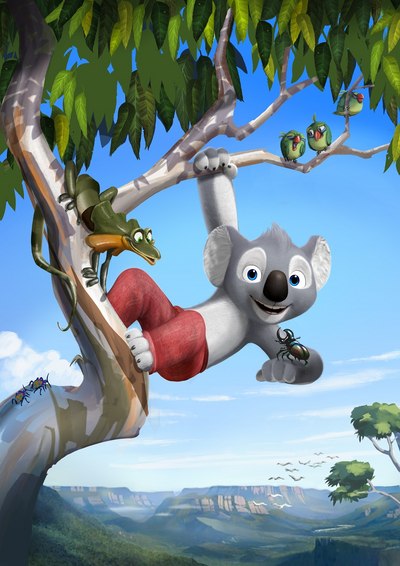 Based on the original 1930’s book series written by Dorothy Wall, Blinky Bill is considered a quintessential Australian children’s classic.  With the first film and TV series produced in the 1990’s, the new contemporary CGI series targeted at 5 to 9 year olds will once again see Australia’s favourite koala Blinky, along with his best friends Nutsy, Marcia and Robert, create mayhem in their efforts to inject some imagination and fun into the sleepy outback town of Green Patch.

Produced by Flying Bark Productions with Studio 100 Media responsible for international sales, Blinky is an all-new adventure sitcom that redefines the Blinky story in an exciting and unpredictable way.  Themes of friendship, adventure and discovery are all wrapped up in a high energy and sharp-witted comedy series.

Continuing to build on the hugely successful brand the rejuvenated TV series will closely follow this year’s international release of Blinky Bill The Movie.

Eleven-year-old Blinky is a furry – and seemingly inexhaustible – bundle of energy, dedicated to the art of adventure, solving problems and finding fun where no fun previously existed.  Without Blinky, the leafy bush town of Green Patch would be a quiet refuge from the dangers and perils of the Aussie outback.  But with this kid koala on the case, average everyday moments have a way of spiralling into the most epic of escapades - no matter if it's out in the searing desert heat or by the cool shade of a billabong.

All it takes is Blinky, his best mate Nutsy, Marcia, the "not so quiet" mouse, and Robert, the overly anxious lyrebird, and anything can snowball out of control.  Inventing ways to pass the time and creatively solving problems can turn a slow day into non-stop outback entertainment. Like Blinky always says - “Wherever there’s a problem, you’ll find us!"