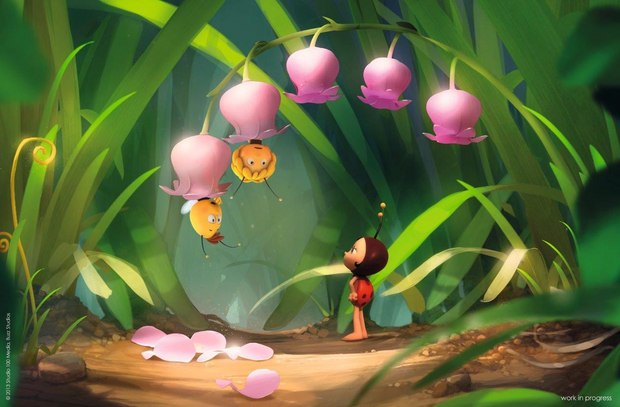 The company has already pre-sold the Maya The Bee – Movie rights to several key territories including Universum Film for the German speaking territories, to Planeta Junior for the territories of Spain, Portugal, Andorra, Italy, Greece and Cyprus, to Sejong Communications for South Korea and to Russian entertainment company Premium Film for the CIS territories.

Studio 100 Film is also pleased to announce that full service media company M.A.R.K.13 is on board as VFX partner alongside Buzz Studios, Australia in association with Flying Bark Productions for the.  The Stuttgart based company supplies film production, VFX, character creation, motion graphics and 3-D animation for features, commercials and music clips.

Using the latest state of the art techniques the Maya the Bee – Movie, produced in 3-D stereoscopic is an German-Australian co-production between Studio 100 Media and Buzz Studios in association with Flying Bark Productions.  The movie is directed by Alexs Stadermann (Director, Head of Story, and Senior Animator for Disney and Aardman Studios on films such as The Wild Bunch, Bambi 2, Tarzan 2, and The Lion King), Executive Producers are Patrick Elmendorff, Managing Director of Studio 100 Media and Jim Ballantine, Managing Director of Flying Bark Productions, who has worked for over 25 years in the animation sector taking on key roles at the Walt Disney Company on projects such as The Little Mermaid, The Rescuers Down Under and Brother Bear as well as on Nickelodeon's The Ren and Stimpy Show, for which he was nominated for two Emmy Awards.  Producers are Barbara Stephen (The Woodlies) for Buzz Studios and Thorsten Wegener (Momo) for Studio 100 Media.

Maya The Bee is a worldwide well-known brand with the CGI series being sold to over 150 countries and in more than 30 languages.  The books of the little bee were first published over 100 years ago and since then over three generations of audiences worldwide have loved the brand.  The original Maya the Bee television series was first produced in the 1970s and was an imaginative blend of fun-filled and thrilling adventures that gained Maya loyal fans from all corners of the globe.

Vic the Viking has gained international recognition initially with the book by Swedish author Runer Jonsson, first published in 1963 and honored with the German Youth Literature Prize in 1965.  With the 40th TV anniversary of the 2-D classic this year the new CGI series has already been sold to more than 70 countries and with two live action films already hitting the big screens Studio 100 Film is delighted to present the new Vic The Viking – Movie to worldwide audiences.

Similarly internationally well-known brand Heidi is based on the famous children’s books written by Swiss author Johanna Spiri and a much-loved character.  From 1880 Heidi has served as a Swiss icon and is loved by parents and children from Switzerland to as far as Japan and the United States.

Since its book form introduction in the 1930s, Blinky Bill is also considered a well-known intellectual children’s property in Australia.