Strangebox Gets Zen with Bifrost in ‘Finding Your Flow’ Spot 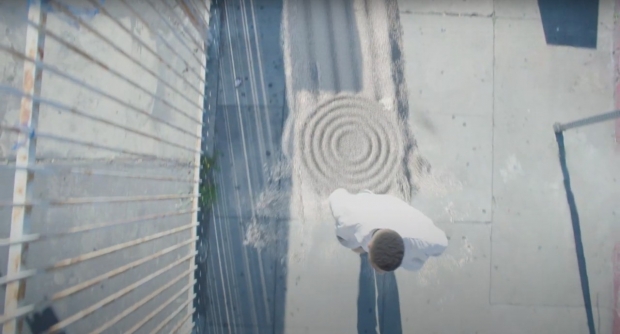 The client brief and art direction presented various challenges for the VFX artist, who had only two weeks to deliver 12 shots with heavy sand simulation. “The initial concept was to create a Zen Garden that would rake into patterns in the ground as the main character walked down the street,” explained Radford. “The client had already shot the footage, and the main issue was that each shot was only a second or two long – not enough time to show the sand physically raking into lines. I got to work experimenting in Bifrost and reimagined the concept to have the Zen lines build up gradually, shot by shot, forming more slowly over time. The client ultimately loved my idea, and I got to work.”

A Bifrost particle system drove the sand, which Radford used to create shapes on the ground, animated along a path, and emitted particles.

“These particles were also emitting material point method (MPM) sand, so I essentially had two simulations that I could play with at once,” he added. “I created sand flying everywhere, and though it looked amazing, I got a little carried away and had to work with the client to scale it back a bit.”

To deliver the shots within the tight, Radford used a clever shortcut technique in Bifrost.

“The sand needed to look a certain way when it was not moving, so I created the static sand in Bifrost by using cache files,” he explained. “To do this, I’d create a simulation, save a particular cache file of where the simulation looked good, then move it around the scene. I did that quite a few times, rendered it off, then composited it in.”

Radford continued, “I worked shot for shot, and no one simulation was the end result. There were approximately five or six simulations in each shot that were composited together for the final look, and everyone was really happy with the end results. Bifrost is really quick for that type of work because it’s procedural and I can plug in lots of different bits of geometry and get things moving quickly.” In addition to the sand effects, Radford’s scope of work encompassed compositing and tracking. At Strangebox, Radford is a one-person operation working independently on 3D animation and VFX work, including projects for commercial clients like Sapporo Beer.

He shared, “Because I am a one-stop-shop for creative work, I’ll often pull 16-to-19-hour days. I am a Maya machine and using tools like Bifrost is critical to helping me create amazing artistry and deliver projects on time. Bifrost’s flexible functionality allows for experimentation, which is invaluable as an artist in both commercial and crypto spaces. Being able to daisy chain different types of nodes together, hack together compounds, and explore new effects or looks allows me to create new and unique work.”