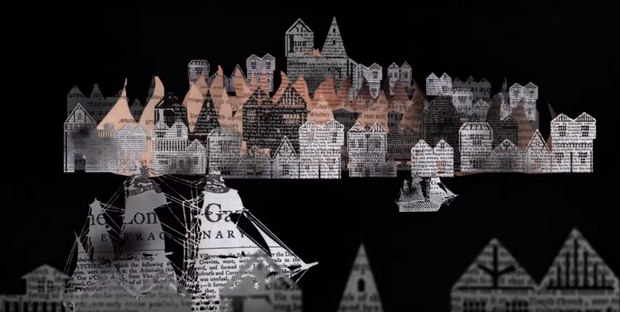 On November 7, 2015, The London Gazette celebrated its 350th birthday as the longest-running English print newspaper. Founded in Oxford in 1665, The Gazette was initially a way for the court to report the facts of the day as the plague had left courtiers frightened of the disease, and reluctant to touch London newspapers.

Lambda Films, a video production company based in the heart of Norwich, is responsible for the 350 Years of The Gazette anniversary video. In collaboration with freelance animator Eleanor Wright, the company produced a 125-second stop-motion animation made from original Gazette newspaper:

The original animation recreates the most momentous news stories the newspaper has covered over its 350 years as the oldest continuously published newspaper in the U.K. Stories recreated in the animation include the Great Fire of London, the Battle of Trafalgar, World War I and World War II.

The small team at Lambda Films brought the Gazette’s story to life through traditional and modern methods. Wright provided the original illustrations and created vectors in Adobe Illustrator which were then printed and cut at Makers Café in South East London. The individual shapes were compiled in Dragonframe to produce the stop-motion set pieces and then digitally composited and layered in Adobe After Effects. Coloring and SFX were then added on top. The animation brings the newspaper to life and demonstrates the role the paper has played in preserving the U.K.’s thriving history.

“I’m honored that Lambda Films were asked to be involved in celebrating such a milestone in British history,” said Lambda Films creative director Ryan Stone. “The rich and diverse subject matter has also been a joy to work with.”