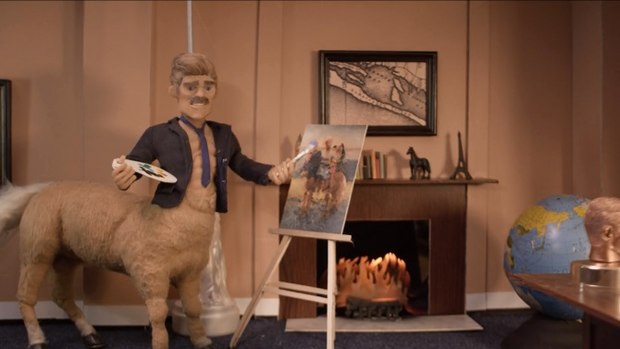 Pinkston’s submission was distinguished from the more than 200 pitches submitted over just a matter of weeks by creators from across the globe. He is one of the five finalists who were selected to receive development funds toward the creation of their proofs of concept, pilot scripts and series bibles based on their original ideas.

Out of the five finalists, Pinkston and his team, including Gregory Hinchman and Peter Stepnoski, were awarded the top prize of $70,000 to produce an 11-minute pilot episode based on their winning proof of concept for Senataur, which was shot at post-production house Odd Machine in Chicago.

Created for an adult audience, Senataur is an irreverent political satire about a half man, half horse from the planet Beaurocratica who has come to Earth to save it from itself.

“Animation is such a special medium -- it really allows a filmmaker to push the boundaries of storytelling,” said Brittany Turner, VP of Digital Video at Adaptive Studios, about the breadth of submissions. “We saw such incredible and diverse submissions from the creative community -- from traditional animation, to 2D vector-based projects, to papercraft and stop-motion. We loved working with Tongal to bring this contest to creators and can’t wait to see Alec’s vision come to life on screen.”

The other four finalists were James Kwan for Moon Rider, Doug Lieblich and Chris Cimino for Journeyus & The Journeynauts, Addie Snider for The Woodland Post and Jared Hedges and Brandon Ray for Kid Engine. Pinkston’s and additional finalists’ series can be viewed at tongal.com/nextgreatanimatedseries.

“This collaboration between Tongal and PGLDS is another powerful example of how being open can change the way talent and stories are discovered,” said Tongol president James DeJulio. “And in this case, we’ve discovered something that is really f***ing funny.”

Tongal is an award-winning, independent creative network that has pioneered a new model for developing content strategies and video production by tapping their network of more than 120,000 creatives and their proprietary development platform. Tongal creators produce TV commercials, social and digital campaigns, and original entertainment for brands like LEGO, Nestle, Mattel, NASA, Unilever and General Motors. Their work has been recognized at Sundance, Cannes and other notable festivals.

Adaptive Studios is the production team behind the Emmy-winning Project Greenlight for HBO and, alongside the show’s executive producers Matt Damon and Ben Affleck, Project Greenlight Digital Studios. Through PGLDS, the studio actively launches creative contests to showcase the talents of emerging filmmakers, striving to build a bridge between Hollywood and the next generation of filmmaking talent. Adaptive produces original TV, film, digital media, books and breathes new life into abandoned IP, often acquired as old scripts overlooked by the studio system.