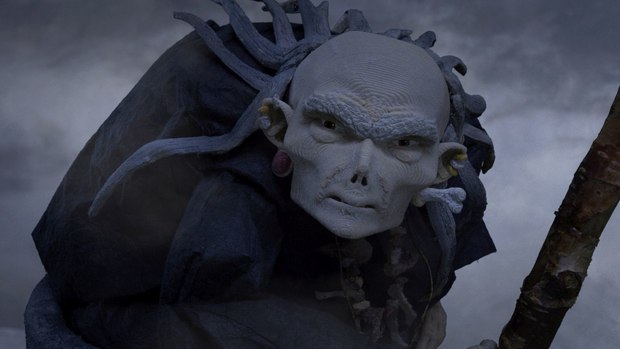 The National Film Board of Canada (NFB) returns to the Festival Stop Motion Montréal with seven productions or co-productions in competition, including the world premiere of Sylvie Trouvé and Dayle Hayward’s Bone Mother and the Canadian premiere of Alexandra Lemay’s Freaks of Nurture. Four other NFB films have been selected to screen in the Professional Films Competition, making their return to Montreal after a successful tour of festivals in Canada and abroad: Patrick Bouchard’s The Subject (NFB), Eva Cvijanović’s Hedgehog’s Home (Bonobostudio/NFB), Matthew Rankin’s THE TESLA WORLD LIGHT (NFB) and Albertine Zullo and David Toutevoix’s The Cannonball Woman (Hélium Films/Parmi les lucioles films/NFB, in co-production with RTS Radio Télévision Suisse). Lastly, Patrick Péris’s Nadine (NFB) will be presented in the Youth Films Competition. The 10th Festival Stop Motion Montréal will be held from September 14-16, 2018.

Presented in English with French subtitles

Who dares to disturb the devil’s grandmother and enter her slumbering house of bones? Who is foolish enough to betray this immortal nature-spirit? Baba Yaga holds the answers you need, but are they the answers you seek? Tread carefully, for your ambitious schemes could come back to haunt you… Blending primal energies with modern 3D-printing technology and thousands of painstakingly hand-painted models, this visually captivating short film brings the enigmatic supernatural being Baba Yaga and the merciless Vlad the Impaler back to spine-tingling life, reweaving their stories into the birth of an unrelenting force that would breed a thousand terrors.

Produced at the NFB by Jelena Popović, with executive producer Michael Fukushima. 'Freaks of Nurture' by Alexandra Lemay.

This animated short about a neurotic mother-daughter relationship is inspired by the filmmaker’s own unorthodox upbringing with her single-parent mom, who is also a foster parent and dog breeder. Self-deprecating and bursting with energy, the film reveals that no matter how grown-up we think we are, we never quite stop craving the love and support of a parent.

Produced at the NFB by Maral Mohammadian, with executive producer Michael Fukushima. The mother is voiced in English by Amanda Plummer and in French by Anne Dorval. The film had its world premiere at the Palm Springs International ShortFest. 'The Subject' by Patrick Bouchard.

An animation filmmaker searches his own body for memories, emotions, and fears to inspire his work. As he starts making cuts with a scalpel, various symbolic objects emerge from his past. After smashing the ribs to reach the heart, he finds the burden he wishes to rid himself of.

Produced at the NFB by Julie Roy. Selected for the 50th Directors’ Fortnight at Cannes and the Toronto International Film Festival (TIFF) 2018. Hedgehog’s Home is a film about a hedgehog whose devotion to his home annoys a quartet of beasts who decide to confront him.

Co-produced by Jelena Popović (NFB) and Vanja Andrijević (Bonobostudio, Croatia), with Michael Fukushima as executive producer. Hedgehog’s Home has won close to 35 international awards and honors to date, including an Annie Award nomination in the Best Animated Short Subject category, the Young Audience Award at the Annecy International Animation Film Festival, and the Short Film Audience Award at Zagreb Animafest. The film had its world premiere in Berlin in 2017 and was screened at the 2018 Sundance festival. Presented in French with English subtitles

Visionary inventor Nikola Tesla writes to financier J.P. Morgan in this experimental animated film. Inspired by real events, this electrifying short is a spectacular burst of image and sound that draws as much from the tradition of avant-garde cinema as it does from animated documentary.

Produced at the NFB by Julie Roy. The film had its world premiere at the 2017 International Critics’ Week at the Cannes Film Festival. Honourable mention ex-aequo at TIFF 2017, along with other awards in Canadian and American festivals. THE TESLA WORLD LIGHT was also selected to screen at the 17th Canada’s Top Ten Film Festival. 'The Cannonball Woman; by Albertine Zullo and David Toutevoix.

Presented in French with English subtitles

Madeleine and her husband travel from village to village, putting on a spectacular show in which she plays the role of a human cannonball. But the couple’s domestic life is less than spectacular: every day seems to unfold just like the one before it. One morning, Madeleine makes a decision that changes the course of their lives. A bittersweet stop-motion animated film about love standing the test of time.

Produced by Claude Barras for Hélium Films (Switzerland), Jérôme Duc-Maugé, Marianne Chazelas and Maxime Fossier for Parmi les lucioles Films (France), and Maral Mohammadian and Michael Fukushima for the NFB (Canada), in co-production with RTS Radio Télévision Suisse. The film had its world premiere at the 2017 Locarno Film Festival in Switzerland and has screened at several other European and North American festivals. Sam is studying quietly in the library when he’s suddenly distracted by the most beautiful girl in the world. When she takes a seat right in front of him, he is immediately bewitched. Who is she? And how should he go about approaching her? This shy adolescent with an overactive imagination has no choice but to find the courage within himself to talk to her before it’s too late.

Produced at the NFB by Marc Bertrand, with Julie Roy as executive producer. The film has been selected to screen at festivals in Canada and abroad, and won an award at the Yorkton Film Festival.