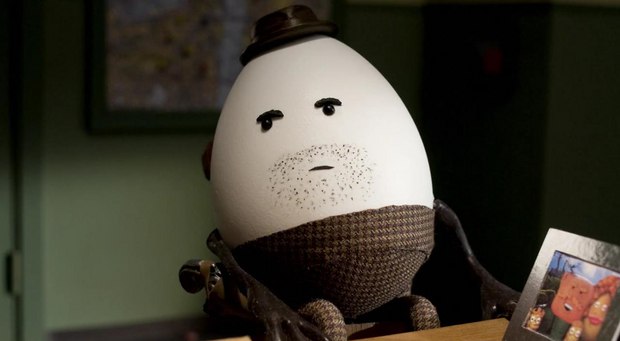 BROOKLYN, NY -- Award-winning animation director Peter Sluszka has kicked off an Indiegogo crowdfunding campaign for his latest short film, Hardboiled. Running now through July 18, the campaign seeks to raise $75,000 USD to fund the remainder of production.

Hardboiled is a satire of the urban American crime drama, animated and built entirely by hand in Brooklyn, New York. The stop-motion film follows the exploits of tough talking detectives Harry and Callaham (an egg and a slice of ham) as they frustrate their irascible knish boss, shake down a sleazy bacon pimp, and tangle with a megalomaniacal strawberry.

“A film like this has to be made in stop-motion because no other medium could deliver the visceral punch of seeing food photography twisted and re-contextualized as a crime-scene,” said Sluszka, the writer, director, and lead animator on the project. The film features the voice talents of Tony award-winning actor George Irving, who also voiced the original Heatmiser, and Emmy award-winning actress Anne Heche, as well as Lola Glaudini, Joey Wells and Edd Hall.

Sluszka’s career in animation spans 18 years and various media, including commercials, music videos, television, and feature films. He’s collaborated with such visionaries as Michel Gondry and Bjork and has garnered accolades from across the industry.

The film is 80 percent complete and has been in production on and off for ten years. “Anyone who loves stop-motion understands that the process is painstaking and compounded with the difficulty of funding a short-film, it’s not unusual to hear filmmakers speak of projects that are years in the making,” Sluszka commented. “Of course the end result of building and photographing so many sets and puppets over thousands of frames results in work that is unique and couldn’t have been produced in any other way.”

Hardboiled is expected to wrap mid-2017.