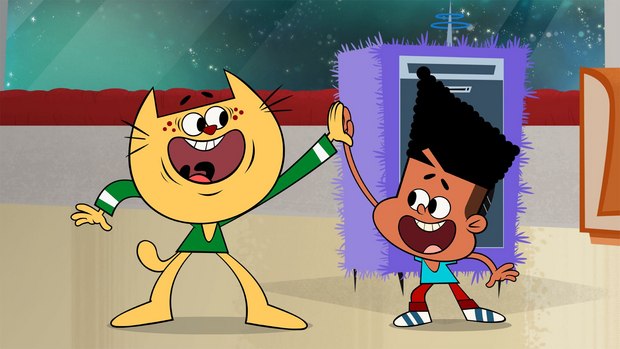 The AEAF Awards are an international competition and screening, now in its 18th year with entries from around the world. The awards are given for creative and technical excellence in the use of visual effects and animation in the creation of screened work. 2017 marked the first year of the TV Series Children category.

Winston Steinburger and Sir Dudley Ding Dong was developed and produced by co-production partners, Sticky Pictures & Entertainment One (eOne) along with commissioning broadcasters, TELETOON Canada and ABC ME in Australia.

The show is also nominated for two 50th Australian Writers Guild (AWGIE) Awards in the Animation category with winners announced in Sydney, Australia on August 25, 2017.

The series has recently been sold to Cartoon Network France and Cartoon Network Belgium along with public broadcaster, OUFtivi in Belgium. In September this year it will air in the Middle East and North Africa via the MBC Group.

The show follows the hilarious adventures of thrill-seeking space kid, Winston Steinburger, his feline best friend, Sir Dudley, and an uptight alien, Hampton, as they explore the galaxy together in a homemade space cruiser seeking out fun adventures. The three astronomical amigos face death on a daily basis, squaring off against bubbling planets, bad-breathed Space-bandits and the worst nemesis of all -- Pam the Destroyer -- a tweenie bopper with a manic personality, an itchy Sydney: trigger finger and a mega crush on Winston.