Yakko, Wakko, and Dot are back in a new original animated series on Hulu that promises nostalgia, humor, and some serious zaniness, all in an art style nearly identical to its original 1990s look. 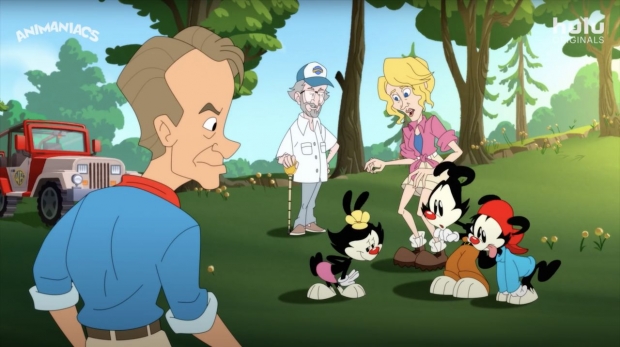 It's time for A-ni-ma-ni-acs… again! Back in August, we reported that Hulu planned to reboot the beloved Amblin Entertainment and Warner Bros. animated series, which would return to small screens with new episodes for the first time since 1998. A clip from the first episode has finally dropped, and it promises nostalgia, humor, and some serious zaniness. We noticed the art style appears very similar, nigh identical, to the 1990s original, and that is no accident. Spielberg insisted that the character designs remain as close to the originals as possible, a fun fact recently shared by co-executive producer Gabe Swarr during a virtual panel during the recent New York Comic-Con.

In the clip, we see the team cheekily re-introduce the Warner siblings via scenes from the classic film Jurassic Park: instead of discovering real live dinosaurs, Grant and Ellie encounter an “extinct species of cartoon.” Seems like they’re keeping it all in the Spielberg family.

Watch the teaser clip of the Animaniacs first episode:

Steven Spielberg returns as executive producer alongside original composer Randy Rogel. Also reprising their roles are Rob Paulsen as Yakko and Pinky, Jess Harnell as Wakko, Tress MacNeille as Dot, and Maurice LaMarche as the Brain. Stream the series starting November 20th, only on Hulu.