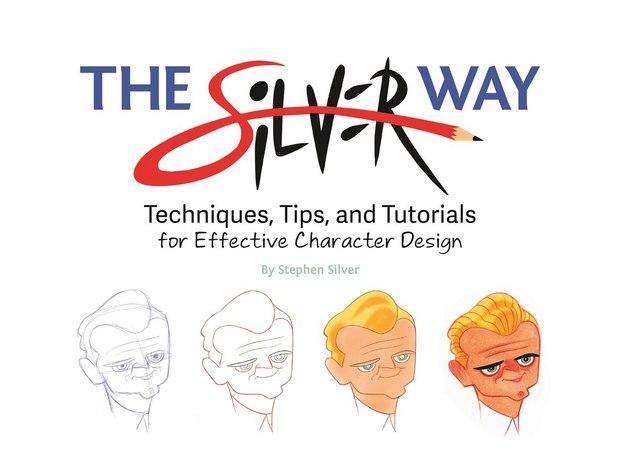 When accomplished artist and instructor Stephen Silver launched his Kickstarter campaign last year to support the publication of his first comprehensive book on character design, The Silver Way: Techniques, Tips, and Tutorials for Effective Character Design, his goal was to raise $10,500. In mere months, his campaign raised 10 times that amount: an astonishing $114,139. Some 1,700 backers wanted a guide for established and aspiring designers alike to take their work to the next level. Silver’s how-to tome hits bookstores across the country this month. His invaluable instruction is informed by decades of experience as an artist on popular animated shows (Kim Possible, Danny Phantom) and as the owner of the Silver Drawing Academy, which has provided art classes and workshops to students in Southern California and beyond, helping launch successful careers. Silver starts by having artists learn the ingredients that make or break design, including balance, construction, unity and proportion, and then asks them to better understand the character’s personality, occupation, habits, attitude and environment. He lays out his vision for successful design: “The Five Phases of the Silver Way” -- story, gesture, design, form and details, all accompanied by supporting exercises. The Silver Way promises to help build confidence and strengthen artists’ character design work for any project, in any style. Full of fun drawing techniques and easy to-follow tutorials, The Silver Way is an educational art book to revisit again and again for guidance, encouragement, and inspiration. Here’s what you can find in The Silver Way: Stephen Silver aspired to be a professional artist at an early age, and began his career drawing caricatures at Sea World in San Diego, California in 1992. Since then, he has designed characters for Disney Television Animation, Sony Feature Animation, Nickelodeon Animation, Cartoon Network and others. Silver continues to work as a freelance character designer in the entertainment industry and as an artist for MAD Magazine. He dedicates much of his time to educating others in the craft as a guest speaker at colleges and animation companies around the world, as an instructor for Schoolism and as the owner of Silver Drawing Academy, an art school located in Los Angeles.