Graphic novel caper about the search for Dracula’s lost treasure created by the supervising animator on the classic animated feature, ‘The Iron Giant.’ 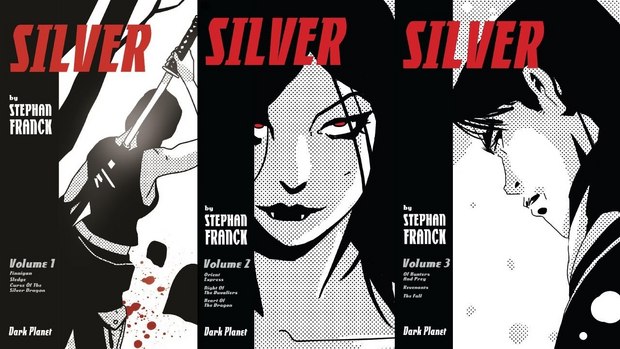 It’s been more than 30 years since Professor Abraham Van Helsing visited Dracula’s castle. Now his descendent, the mysterious vampire hunter Rosalyn Van Helsing, is teaming up with a ragtag group of con men for a high stakes heist to rob Europe’s richest vampires. Welcome to the world of Stephan Franck’s Silver, a globe-trotting graphic novel series that mashes up the world of Bram Stoker’s classic novel Dracula with action, adventure, humor, pulp storytelling and modern sensibilities. In Silver, a group of cons discover the late Jonathan Harker’s secret ledger, which discloses the existence of an exotic treasure of silver hidden in Dracula’s castle. Finnigan, the group’s leader, may be ethically challenged, but he knows a retirement plan when he sees it. He’s willing to do whatever it takes to pull off the heist of the last ten centuries, even if it means allying with a beautiful, sword wielding vampire hunter…. who just happens to be a descendent of Van Helsing. “I started Dark Planet Comics because I had to tell the story of Silver and wanted to forge my own way, without having to answer to a corporate overlord,” said Franck. “Kickstarter has allowed me to connect with an audience, print the book, attend comic conventions and, most importantly, tell the story the way I wanted, with action, adventure, mystery, humor and plenty of vampires. I didn’t have to sell a publisher on doing a period story or justify my decision to do a black and white comic because I went straight to the audience.” When he’s not writing and drawing comics, Franck is the Head of Story for the Playmobil Movie for Lionsgate. Previously, he worked as a supervising animator on the cult classic film The Iron Giant and as a key story contributor to Despicable Me. Franck also co-created the award-winning animated TV Series Corneil & Bernie (Nicktoons, Hub Network), and received an Annie Award nomination for Best Director in a TV Program, for the special Smurfs: The Legend of Smurfy Hollow, the first ever hand-drawn version of the beloved characters done at a feature-animation quality level.

Now Franck is back with more of the Silver story, and in Volume Three the con is in full swing and James Finnigan’s uniquely talented band of grifters is deep undercover. But talent comes at a price. Secrets and agendas emerge, and characters are pushed past their breaking points. While Finnigan struggles to keep his team on track, thrilling action, suspense, and drama ensues in the most intense and gothic volume yet.

If funded through Kickstarter, pledges will be delivered to backers this fall. The Silver Volume 3 Kickstarter campaign is live as of July 10th and runs for 30 days. For updates, follow Dark Planet Comics on Twitter, Facebook, and Instagram.

“I love the world of animation,” said Franck. “But there’s something magical about the world of comics that I can’t resist. Silver is a supernatural story, full of mystery, forgotten places and ancient secrets. I hope readers will continue with me on this journey.”