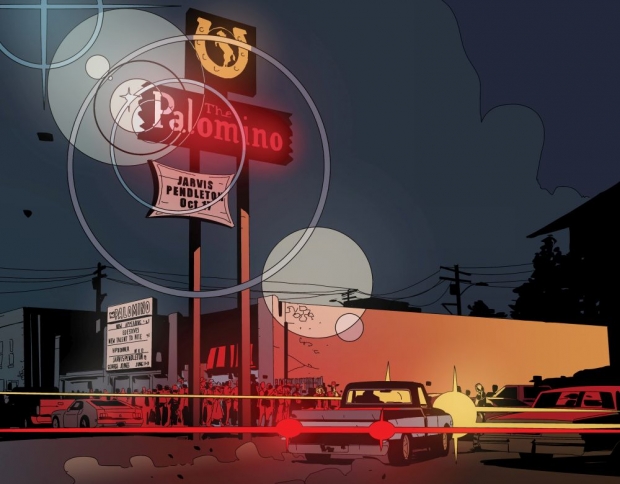 Animator, writer and director, Stephan Franck (Spider-Man: Into the Spider-Verse and The Iron Giant) and his company, Dark Planet Comics, are launching a Kickstarter campaign to fund “PALOMINO,” the first part of a planned four-part graphic novel series that captures Los Angeles’ spirit, with hardboiled dialogue, honkytonk music, and details from the city's weird and forgotten history.

The year is 1981. The American century is running on fumes, but the end isn't anywhere in sight. The cowboy is still America's most central symbol—and from movies, to music, to the President himself, it all hails from Southern California. Welcome to “PALOMINO,” Franck’s all new neo noir graphic novel series, set in the lost culture of Los Angeles’ country music clubs.

The age of urban cowboys is in full swing. Cowboy hats and rhinestone suits are all the rage. Kenny Rogers Lady is Billboard’s number three song of the year. Dolly Parton is a national icon. And across LA, six nights a week, working musicians, TV actors, stuntmen, cops, hustlers, and broken souls all play their part in the cultural myth making. Most of them are just trying to survive—on the B-side of the City of Angels

“Cowboy culture is central to California’s history,” explained Franck. “It came out west with the Dust Bowl Okie migration that Steinbeck depicted in “Grapes of Wrath,” showed up again in Easy Rider and the hippy generation’s cosmic cowboys, and in one form or another sold the American century to the world and to America itself. On one level, “PALOMINO” is about the lost subculture of LA’s country western music scene of the 1980’s, but it’s also about people living inside the myth-making machine, motivated by the belief that, here in the west, you can always reinvent yourself.” At the center of “PALOMINO” is a unique father-daughter relationship. Eddie Lang’s an ex-cop turned working musician with big dreams, but dreams don’t pay the rent. So, Eddie reluctantly works as a private investigator to provide for his teenage daughter, Lisette. Eddie and Lisette share an unbreakable bond and a dry sense of humor. But they’re stuck. They’re haunted by a terrible loss and an unsolved crime that looms large over their lives. They’re running out of time to fix their family. Just as things seem at a stalemate, a new murder case upends their lives.

This is “PALOMINO” — where Farrah Fawcett hair reigns supreme, where Ronald Reagan is beginning his first term as President, and where LA’s hottest music spot is North Hollywood's historic Palomino Club.

If funded through Kickstarter, pledges will be delivered to backers this summer. The PALOMINO Kickstarter campaign was live as of Monday, April 13th and runs for 30 days, more information is available here.