Veteran animator Stephan Franck’s Dark Planet Comics imprint readies the re-issue of Silver #1 and #2, plus the brand-new issue #3, as well as a collection of all three issues:  Silver Volume 1, with pin-up art by guest artists Rodolphe “Rodguen” Guenoden and Takeshi Miyazawa. 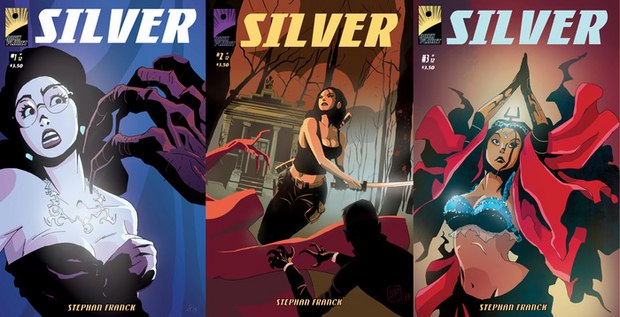 Stephan Franck had a busy 2013. He directed the 2D/CG combo Smurfs: The Legend of Smurfy Hollow, which earned him a nomination for achievement in Directing an Animated TV/Broadcast Production at the 2014 Annie Awards, and created Dark Planet Comics, his own comic book imprint.

Now, Dark Planet Comics is ready to re-issue Silver #1 (variant edition) and #2, plus the brand-new issue #3, and a collection of all three issues, plus bonus material in a trade paperback: Silver Volume 1.

Dark Planet Comics launched its first Kickstarter campaign just nine days ago, and already it has reached more than half of its funding goal. “We got off to a great start,” Franck says. “All the work has already been created. The point of the campaign is to help fronting the printing cost ahead of us. So essentially, it’s just pre-ordering the books for an April delivery.”

Beyond the books, Dark Planet is offering signed and numbered limited edition art prints, which have been a hit on the convention circuit.

While originally approached by a publisher for Silver, Franck decided to go the truly independent way instead, and started his own imprint. “I’ve always been entrepreneurial,” Franck says. “When I was little, my parents had a book store with a pretty extensive comic book section. I practically lived there, reading comics, and tending the register. So really, Comic books and small business is where I come from.”

Dark Planet is committed to printing its books. “Print editions, are vital,” Franck says. “Although we greatly enjoy our digital distribution, at this stage of our development, comic book conventions is the place where we get to show our ware to a new committed audience. That’s where did 90% of our business last year, and for that to work, we need physical books on the table.”

Dark Planet Comics is committed to releasing both individual comics and collected editions. “Individual comics are a great entry point for reader,” Franck says. “It’s been really awesome at conventions, to see people come in on the first day, and buy issue #1, read it that night, come back on the second day for #2, read it that night, and often come back if there’s a third day, buying copies for their friends. These times are tough for everybody, and new readers are solicited in every direction. It’s very important that they get a chance to try something new at almost no financial risk.”

Meanwhile, the collected editions are vital to the growth of the company. “The trade paperback edition of SILVER volume 1 will open us store distribution,” Franck says. “Comic Book stores have expressed strong interest in SILVER, and are waiting for the trade.”

Franck teases of Dark Planet Comics next move. “We have a line of original collectibles in the works, and all I can say is that they look very exciting. We’re hoping to have them available for the summer conventions.”