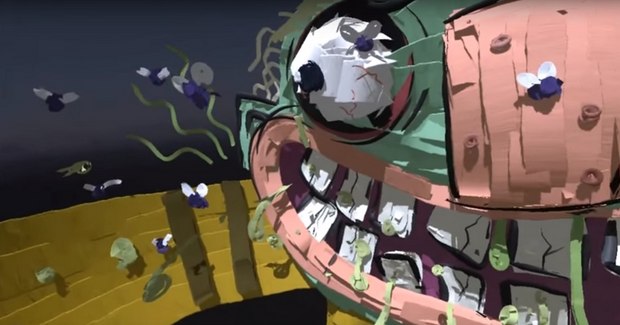 The showcase, which runs from June 13-24, features a wide range of surreal art that surround the viewer. The artist creations can be viewed from within the Tilt Brush Showcase using the HTC Vive, and also in the form of daily videos that will be released sequentially over the next two weeks. They can be viewed on the social channels: Google+ and @TitmouseInc on Twitter and Google+ each day excluding weekends.

With Tilt Brush, fans of Titmouse will have the opportunity to experience their favorite artists’ work in a three-dimensional virtual reality sphere. Using Google’s Virtual Reality technology, they can actively see each brushstroke and experience the creative content continuum by getting up close and stepping around and through the art. The Two Weeks of Titmouse works include: Penn Ward’s “Colorful Pals,” Jhonen Vasquez’s “Free Hugs,” Peter Chung’s “Triumvirate,” and Dave Johnson’s “Dragon Head.”

“It was clear that this incredible, ground-breaking medium had tremendous potential from the moment I stepped into the room, grabbed the brush, and drew a three-dimensional penis,” said Titmouse founder Chris Prynoski. “With Tilt Brush we’ve drawn everything from your mom with crab legs to your mom with tank legs. When we first started working with the software it was in diapers...one-and-a-half years later it’s now wearing full grown man pants, and we can’t wait to show you what’s in the pockets.”

Titmouse artists featured in “Two Weeks of Titmouse” include: