Stardust Re-Teams With WeChat to Celebrate the World Cup 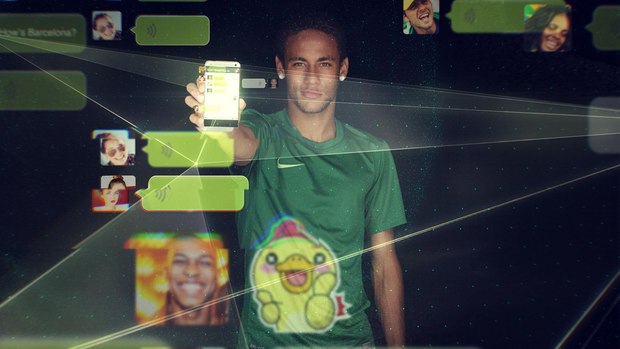 The spot features a rapid fire succession of images related to the World Cup, Brazil and of course football (soccer), while Neymar speaks to camera in a serious tone about the trials and tribulations of keeping up with his family and friends amid his busy life as a world-renowned sports superstar. The global campaign targets 10 markets, including Argentina, Spain, Brazil, Hong Kong, India, Indonesia, Italy, Malaysia, Mexico, Nigeria, and the Philippines. In addition to being posted on YouTube, the new spot will air on television in the 15 markets. There will be accompanying print and outdoor advertising in at least some markets.

“First and foremost, our goal was to create a piece that was effective and impactful for WeChat, but one that also featured Neymar in an honest and authentic way,” explains Stardust Partner/Managing Director Dexton Deboree. “What we’ve learned from the many superstar athletes we’ve shot over the past year is that the more you push these guys outside their authentic zone, the further you get from a believable performance. Neymar has a great personality, but is also driven and serious about his sport and his life. So we created a spot that celebrated those key features most natural to him while showcasing the product in a bold and articulate way. When it came to execution, we really leaned on Stardust’s sweet spot, which is the intersection of live-action and graphics. Seth is an amazingly talented live-action Director, whose skill just continues to strengthen and evolve. Our design and animation team is strengthening in parallel. This piece for us was a nice example of showcasing those two things working harmoniously and continuing to creatively elevate our game.” “We needed to shoot Neymar in a few different set-ups, including against green screen for some exterior scenes,” details Director Seth Epstein, also a Partner in Stardust with Deboree. “For the Graphic spot, I wanted the viewer to feel like it was personal for Neymar, which impacted framing and lighting. I also had to account for the graphic language we established ahead of time, which was centered around appealing to a younger audience. I chose to build out an octagonal ring light, mirroring a soccer ball’s panel as our source of light, which gave us beautiful light on Neymar and created a graphic framing device emulating the shape of the soccer ball.”

WeChat already has more than 300 million registered user accounts, including 70 million outside China, mostly in Asian markets. WeChat started as a messaging app similar to WhatsApp, but the addition of video calls, photo sharing, location-based services and other Social features also make it similar to Instagram, Facebook, Twitter and Skype. WeChat's popularity outside of China has soared recently, growing by 20 million registered user accounts to reach 70 million in only six weeks. The growth is attributed to promotional campaigns, special WeChat deals provided through some Asian telco operators, and the increasing number of smartphone users in target markets. WeChat has not officially launched in the U.S., though Tencent has an American office doing groundwork and studying the market.