‘Star Vs. The Forces Of Evil’ Debuts on April 6

The fiercest most powerful princess in the universe comes to Disney XD; new animated series is ushered in by ‘Gravity Falls’ mid-season finale. 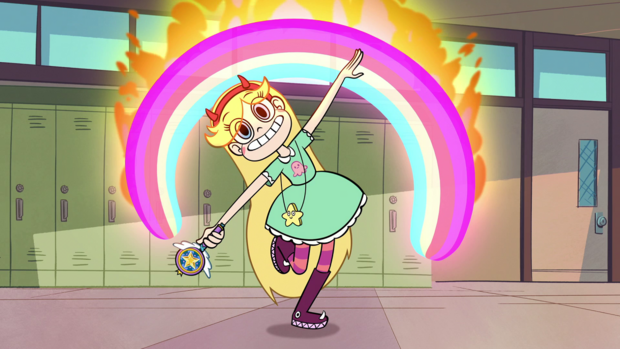 Toronto, Canada -- Wands that shoot rainbows, dimension cutting scissors and a flying pony head are just three of the out-of-this-world accessories Princess Star Butterfly is bringing to Disney XD when the animated adventure series Star vs. The Forces of Evil premieres. Debuting as a special one-hour episode on Monday, April 6 at 6 p.m. ET, the quirky comedy follows Star Butterfly, a teen princess from another dimension who, after receiving an all-powerful magic wand for her 14th birthday, is sent to Earth to live with the Diaz family and their responsible son, Marco. The zany new series debuts as part of Easter Monday’s Animation Domination and is preceded by the mid-season finale of fan-favourite series Gravity Falls.

Adjusting to life on a new planet with a new family can be challenging, but fortunately for Star, karate-loving Marco acts as her guide, helping her adapt to her new home. In return, the fun-loving magical teen princess helps Marco come out of his shell, teaching him to take chances and make the most of every day. Together, the unlikely duo navigate high school and embark on dimension-hopping adventures across the multiverse all while keeping Star’s wand out of the clutches of arch-nemesis Ludo and his monstrous forces of evil.

In the premiere episode, titled “Star Comes to Earth/Party with a Pony,” Star’s parents send her to Earth in an attempt to keep her safe, after she receives a royal magic wand for her birthday. Then, Star’s best friend from her home dimension pays a visit and feels threatened by Star’s new friendship with her host-brother Marco. Beginning April 19, Star vs. The Forces of Evil will air regularly Sundays at 12 p.m. ET.  Disney XD OnDemand will also offer new episodes as they become available beginning April 7.

Part of an Easter Monday Animation Domination, the wackiness officially begins at 2 p.m. ET with The Gravity Falls Marathon of Mystery. The nine consecutive episodes lead into the highly anticipated mid-season finale titled “Not What He Seems,” at 6:30 p.m. ET, where government agents take Stan into custody, leading Dipper and Mabel to question how much they really know about their good ol’ Grunkle. The misadventure features a special guest voice performance by Nick Offerman (Parks and Recreation) as Agent Powers.

The quirkiness continues at  where fans can learn more about the series and its characters. The dedicated show page also features exclusive video content and the cool new game “Star vs. the Forces of Evil – Creature Capture,” where players can use Star’s wand to match creature colours and zap them back into the tower dome.

Star vs. The Forces of Evil is created and executive-produced by 2009 California Institute of the Arts (CalArts) graduate Daron Nefcy and is produced by Disney Television Animation.