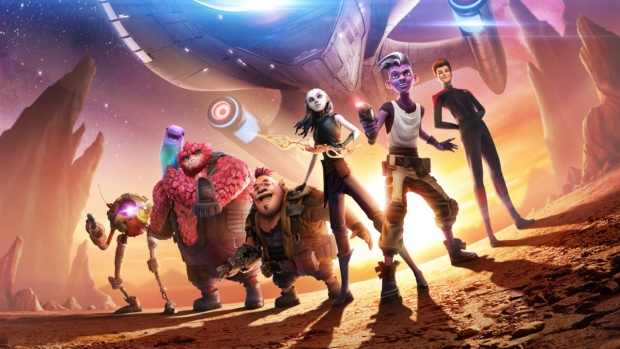 It was also announced that the series, produced by the Nickelodeon Animation Studio and CBS Studios’ Eye Animation Studios, will premiere with a one-hour episode on Thursday, October 28, exclusively for Paramount+ subscribers in the US.

Developed by Emmy Award winners Kevin and Dan Hageman (Trollhunters and Ninjago) the CG-animated series Star Trek: Prodigy is the first “Star Trek” series aimed at younger audiences and will follow a motley crew of young aliens who must figure out how to work together while navigating a greater galaxy, in search for a better future. These six young outcasts know nothing about the ship they have commandeered – a first in the history of the Star Trek franchise – but over the course of their adventures together, they will each be introduced to Starfleet and the ideals it represents.

Take a moment to boldly go where no Star Trek animated series has gone before!

In the series, Mulgrew (Star Trek: Voyager) reprises her Kathryn Janeway role as Janeway, now a starship’s built-in emergency training hologram in the series, which takes place in the year 2383, after the events of Star Trek: Voyager, and in the Delta Quadrant. The cast includes Rylee Alazraqui (Doug Unplugs, Home Economics) as “Rok-Tahk,” a Brikar and an unusually bright eight-year-old girl - Rok is a bit shy, but not when it comes to her love for animals; Brett Gray (On My Block, When They See Us) as “Dal,” 17 years old and an unknown species, who fancies himself a maverick, who even in the toughest times, holds strong onto his unwavering hope; Angus Imrie (The Crown, Emma) as “Zero,” who is a Medusan: a noncorporeal, genderless, energy-based lifeform - since others would go mad at the sight of their true self, Zero wears a containment suit they made themselves to protect others; Jason Mantzoukas (Infinite, Big Mouth) as “Jankom Pog,” a 16-year-old Tellarite - Tellarites are known to relish an argument, and Jankom is no different… regardless of opinion, he will always play ‘devil’s advocate’ for the sake of hearing all sides; Ella Purnell (Army of the Dead, Sweetbitter) as “Gwyn,” a 17-year-old Vau N’Akat who was raised on her father’s bleak mining planet and grew up dreaming to explore the stars; and Dee Bradley Baker (SpongeBob SquarePants, Dora the Explorer) as “Murf,” whose age and species is unknown but who is an endearing, indestructible blob with curiously good timing and an insatiable appetite for ship parts.

John Noble (Fringe) and Jimmi Simpson (Westworld) were just cast as series regulars, lending their voices to the villains The Diviner and Drednok, respectively.