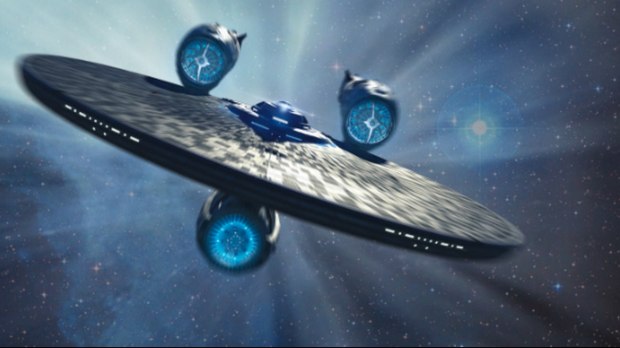 LOS ANGELES -- Digital cinema leader Barco and Bad Robot Productions have announced Star Trek Beyond, one of this year’s most anticipated films, will be released in Barco’s multi-screen theatrical format Barco Escape, bringing audiences inside the action from the interstellar franchise like never before. J.J. Abrams’ Bad Robot will master a special version of the film, expanding the storytelling across three screens to unveil a thrilling new movie going experience to audiences when the film, from Paramount Pictures and Skydance Productions, releases on July 22.

“Justin Lin’s Star Trek Beyond is an epic adventure — truly larger than life,” said producer and Bad Robot president J.J. Abrams. “It is especially fitting, then, that we are partnering with Barco to provide an ultra wide-screen immersive experience using their unique Barco Escape format. This premium format dramatically expands the width of the viewing plane, giving filmmakers an innovative new tool with which to tell stories and audiences an enhanced new way to experience cinema.”

Barco Escape will illuminate the Star Trek universe by creating key “moments” across all three screens that will exhilarate fans. Bad Robot will re-master more than 20 minutes of Star Trek Beyond into the new format. As part of Bad Robot’s commitment to the innovative technology, an executive from the company will also join Barco Escape’s advisory board.

“J.J. Abrams and the Star Trek franchise share in our passion for exploration and innovation, which is why we’re thrilled to lead Barco Escape’s 2016 lineup together with Beyond,” said Barco Escape CEO Todd Hoddick. “We are honored to have J.J. and the incredibly talented team at Bad Robot Productions as partners and look forward to sharing the power of this experience to capture the magnitude of big, bold stories like Star Trek Beyond.”

Since debuting in fall 2014 with the hit movie The Maze Runner, Barco has been working hand-in-hand with today’s top studios and filmmakers to create projects that offer audiences an unmatched viewing experience - only available in theaters. Director Scott Waugh (Act of Valor, Need for Speed) recently announced he is directing the first feature shot entirely for Barco Escape. The film, titled 6 Below and starring Josh Hartnett, will be released later this year.

Barco Escape also holds a multi-year deal with 20th Century Fox and a development deal with Jerry Bruckheimer, who is also an advisory board member. Barco is committed this year to offering at least four films in Barco Escape, which has proven to bring audiences out to the cinema with its first two theatrical releases.