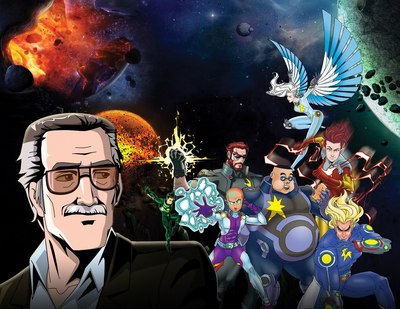 A co-production between POW! Entertainment, GBI, and The Hollywood Reporter, Stan Lee's Cosmic Crusaders is an adult animated series appealing to 18 - 34-year-olds written by Fabian Nicieza (co-creator of Deadpool) based on a concept by Stan Lee, who will edit and voice himself as one of the series’ main characters. Comic artist Todd McFarlane is creating the cover graphics for THR’s special issue on Lee.

The first four episodes of Stan Lee's Cosmic Crusaders will premiere exclusively on THR.com with one episode airing each day during Comic-Con International 2016. The webisodes will cliffhanger daily, and the first one will actually be in VR, with ‘VR boxes’ to place on smart phones being given out at Comic-Con. Stan Lee's Cosmic Crusaders is the first series to launch on THR.com and will be promoted through THR’s YouTube channel, Facebook, Twitter and Instagram pages. THR will also collaborate with distribution partners on promoting the premiere episodes on THR.com and the remaining 22 episodes of the series. The animated series will then move to full global distribution by GBI.

The global consumer products program will be introduced by GBI at Licensing Expo 2016, beginning June 21st.  The company has already secured national retailer Hot Topic to launch the brand under a direct–to-retail apparel and accessories program in stores and online in conjunction with the webisode launch at San Diego Comic-Con.

“I can’t wait to bestow upon the world one of our latest creations, Stan Lee's Cosmic Crusaders," said Lee when talking about the new series. “And as if this wasn’t exciting enough, we’ve joined forces with the creative teams at The Hollywood Reporter and Genius Brands so you can guarantee this will be an unforgettable event that you won’t want to miss!"

“The Hollywood Reporter is thrilled to collaborate with Genius Brands and POW! Entertainment to celebrate Stan Lee’s amazing accomplishments and longevity with the premiere of his latest animated series, Stan Lee's Cosmic Crusaders on THR.com during Comic-Con International,” added Min. “Having that exclusive airing coincide with a special feature on Stan, the superhero of comic creators, within the pages of our special Comic-Con edition of THR is so perfect. Nobody comes close to Stan’s creative prolificacy, and the introduction of this new series is the ideal opportunity for the industry and THR to honor Stan and his trailblazing contributions as a one-of-a-kind visionary.”

“Stan Lee is a true industry icon, from his Marvel Superheroes like Spider-Man, Captain America, Iron Man, X-Men, Hulk, the Avengers, the Fantastic Four, to the latest characters in Stan Lee's Cosmic Crusaders, he continues to stimulate our imaginations with characters and stories that are as indelible and relevant today as they were 50 years ago and will be 50 years from now,” said GBI’s Heyward. “We are honored to partner with Stan’s POW! Entertainment on producing his latest project and look forward to further collaborations as we celebrate this legendary man and his remarkable body of work.”

Stan Lee's Cosmic Crusaders follows Stan Lee who, while having writers block trying to come up with a new comic, meets seven aliens who have crash-landed in the U.S. Each of the aliens has superhero powers, however, each can only use their power in the context of their homeland. On the verge of being captured by ‘the men in white coats,’ Lee offers them sanctuary and convinces the white coat men that the aliens are actually superheroes, resulting in Lee’s intensive superhero immersion training, helping the aliens learn how to access and use their powers as superpowers on Earth.