The comic book legend talks about his upcoming animated movie, Stan Lee's Mighty 7, set to debut on The Hub network on February 1. 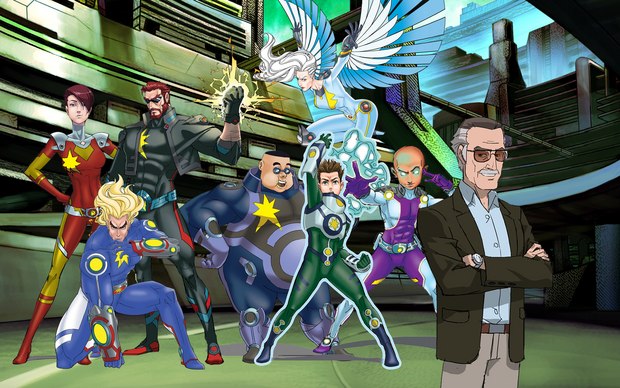 Comic book legend Stan Lee is taking on his first starring role in Stan Lee's Mighty 7, which is set to premiere on the Hub Network on Saturday, February 1, according to a report by THR’s Heat Vision.

Based on the comic of the same name and described as the "first superhero reality show," Mighty 7 features Lee as an animated version of himself, a legendary superhero creator who teaches a crew of alien prisoners and their jailers, who have crash-landed on Earth, how to work together and use their powers to be superheroes -- and he in turn documents their adventures in comics. The 90-minute movie features the voices of Sean Astin, Jim Belushi, Mayim Bialik, Darren Criss, Flea, Armie Hammer, Teri Hatcher, Michael Ironside and Christian Slater.

Leading up to the movie's premiere, Lee, who is 91, gave a lively interview about how the idea came about, what viewers can expect and why superheroes continue to be so hot. Head over to THR to read the full interview:

We are so lucky. … We've got so many great people that this show would be a hit even if it had no story. I don't know how we got so lucky. I'd like to take credit for it, but whoever got these people together in my mind is the best casting director in America. To have people of this caliber for an animated story for kids is just wonderful.