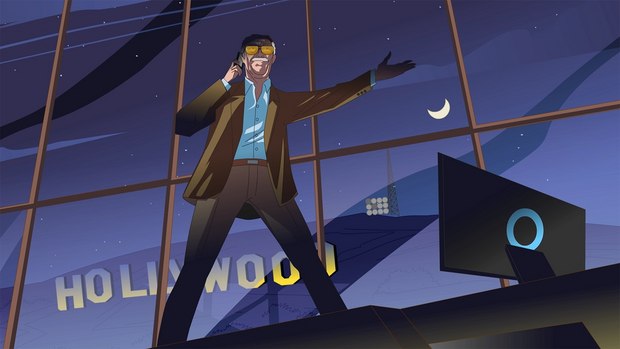 LOS ANGELES -- The Hollywood Reporter announced the Tuesday, July 19th premiere on THR.com/cosmic of the new action-adventure, comedy series, Stan Lee’s Cosmic Crusaders, from Stan Lee’s POW! Entertainment and Genius Brands International. Stan Lee’s Cosmic Crusaders, which targets an 18 – 35-year-old audience, debuts with the first four episodes premiering exclusively on THR.com in addition to The Hollywood Reporter’s YouTube channel and Facebook page. An episode will air each day leading up to and throughout Comic-Con International 2016, which opened July 21. Episodes will continue to be available on THR.com post Comic-Con.

The series is written by Deadpool co-creator Fabian Nicieza and based on a concept by Stan Lee, who also voices himself in a starring role. Stan Lee’s Cosmic Crusaders follows comic book legend Stan Lee, who offers sanctuary to seven aliens that have crash-landed on earth, and hold superpowers tied to their native planets. Protecting the aliens from men in white coats with dubious motivations, Stan Lee immerses his new protégés in intensive superhero training to help them unlock their powers on earth.

The episodes, each of which ends with a cliffhanger, will also be available in Virtual Reality, from Legend VR, along with ‘VR boxes’ to place on smart phones available at Comic-Con. The VR experience gives viewers a chance to sit in Stan Lee’s living room and watch each of the first four episodes with the comic-book icon, who shares his thoughts before and after each episode. The VR app will be available on Thursday, July 21 via iTunes and Google Play.

“The Hollywood Reporter is thrilled to celebrate Stan Lee’s uncanny, amazing and incredible accomplishments over the course of a momentous career, which has not yet found its peak,” said Janice Min, chief creative officer and co-president of The Hollywood Reporter-Billboard Media Group. “With Stan Lee’s Cosmic Crusaders, fans will get access to the mind of a real-life creative superhero in Stan Lee. Bringing this series to fans around the world, THR will help honor the trailblazing creative contributions and visionary leadership Stan Lee has given to entertainment.”

"I can't wait to bestow upon the world one of our latest creations, Stan Lee's Cosmic Crusaders," said Stan Lee. "Celebrating 75 years in the entertainment business is staggering enough, and as if this wasn’t exciting enough, we’ve joined forces with my friends at The Hollywood Reporter and Genius Brands International so you don’t want to miss out on this event!”

“We have worked with the creativity and genius of Stan Lee to launch what we anticipate to be a successful franchise to add to his ever-expanding arsenal of hit brands,” said Genius Brands International’s Chairman & CEO, Andy Heyward.  “It has been a pleasure to work with Stan and Janice to bring Cosmic Crusades to THR’s millions of subscribers.”