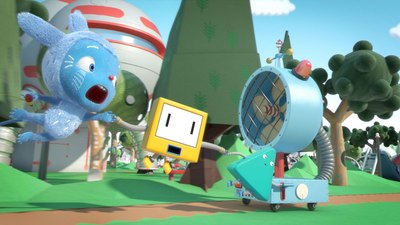 STOCKHOLM, SWEDEN -- Based on the UK children’s magazine Okido, the BBC’s Messy Goes to Okido was a hit with kids just a few months into its run. Blending CG with live-action footage, Messy offers a whimsical, yet totally educational dive into the wonderful world of science. From start to finish, all output was the result of the hard work by Squint/Opera. All work across the project’s 52 colorful, vibrant and engaging episodes came solely from the studio’s London HQ, and the results have been spectacular. ftrack was able to lend a hand, enabling Squint/Opera to stay on target while bringing its magical series to life.

“The amount and variety of assets we had in this production was insane!” commented technical director Manuel Reyes. “There were more than 200 unique 3D characters, over 60 environments, and also a huge number of 2D assets. The challenge with that is trying to keep up the quality of the show while speeding up the production to our limits!”

Squint/Opera is used to doing a bit of everything, video content, animation, apps, design, digital exhibitions. Still, bringing Messy Goes to Okido to television was a significant endeavor for the team, with more than 100 people working on it to date. Squint/Opera started developing the concept with Okido Magazine back in 2011, and collaborated to create series lead Messy Monster. From there, Squint/Opera began working on the full series in spring 2014.

Who is Messy Monster? Well, he’s curious, adorable, and set on helping young viewers find answers to very big questions. Each episode, Messy pops a question about the human world, and then zips off with friends Zoe and Felix to the fantastical setting of Okido to discover the answer.

“Why do things fall down and not up? Where do echoes come from? The brave trio fly to the moon, shrink to the size of atoms, and ride on the backs of giant butterflies to find these answers,” said Jen Coatsworth, line producer at Squint/Opera. “The show brings science to life using high-quality animation, comedy, and adventure. It raises the bar for kids’ TV, inspiring children to be curious about arts and science.”

The tight timelines on Okido were only exacerbated by the fact that, when we say Squint/Opera did everything across all episodes, we mean everything. “Unlike most studio productions, every aspect of Messy Goes to Okido was created under one roof, an extraordinary and unusual feat,” asserted Coatsworth. “From scripting to storyboarding, animation, live footage, sound, music, and editorial, everything was completed in Squint/Opera’s East London studios.”

Squint/Opera delivered the first 25 episodes by September 2015, which is when the series premiered on the BBC’s CBeebies block. An additional backorder of 27 episodes for were scheduled for delivery by January 2016. It was this challenging schedule that kick-started the studio’s use of ftrack, nearly two years ago.

“We used ftrack as soon as the scripts for the episodes were completed, creating all the assets and linking them to the corresponding shots,” said Reyes. “It was a great way to keep everything visible and easy to find for every artist and producer working on the show. “At each stage of production, shots and assets were reviewed through ftrack, especially at the animation stage, where all the retakes were checked through the web player,” he continued. “Notes were written on every shot, and this became very useful as they were often needed months later in production, and would otherwise have gotten lost. We also distributed all tasks through ftrack’s task system.”

Assets were a key challenge, with more than 200 different 3D characters in play across the series, along with 60+ environments and tons of 2D assets.

“The biggest challenge was trying to keep up the quality of the show while speeding up the production to our limits, but we are very happy with the results,” beamed Reyes. He added that the team’s favorite feature in ftrack is the ability to choose from many different filters and save them in varying presets. “This saved us a lot of time, and we were able to configure what we wanted to see listed depending on the type of tasks we needed to do.”

“Before ftrack we were using Google Docs,” says Voy Zankowski, the agency’s pipeline manager. “Using ftrack, the pipeline is much smoother, we can see the whole spectrum of work through one platform, and that’s vital in a fast-paced production setting.” In fact, Squint/Opera has ftrack deeply integrated with its pipeline, set up to communicate with tools such as 3ds Max, NUKE, HIERO and Deadline. That way, ftrack is able to easily grab the shot name and task information, along with other crucial details that help the team stay organized.  Squint/Opera has also carried out a fair bit of custom development work using ftrack’s API to seamlessly blend its solutions into the workflow.

“We’ve developed automatic task updates, for example,” explained Zankowski. “Whenever an artist submits a job to Deadline, 3ds Max uses an external Python script to communicate with a small update server, passing down the project, episode, sequence, shot, and task details in the request. That update server then uses the received data to speak to the ftrack API and update the appropriate task, whether it is status or version number. This way, ftrack always contains information about which shots are already through the lighting stage and waiting to be rendered. At the same time, every job on the render farm gets a small post-job script attached. It gets executed after the rendering finishes and uses the update server to notify ftrack that the job has finished rendering and is awaiting compositing.”

Using this method, Squint/Opera can relax, knowing that ftrack is completely up to date while making everyone’s jobs a little easier all round. Zankowski says they have a similar custom integration working with NUKE, along with syncing scene length with 3ds Max and a custom version publisher that comes out of Deadline Monitor.

While many customers find that ftrack meets their project management needs right out of the box, the ability to customize the software further via the robust API has become one of the greatest benefits for Squint/Opera.

“We’re always looking for ways to improve the efficiency of our pipeline process through innovative ideas, and the ideas just keep on rolling!” said Zankowski. “We see many possibilities where we could use the ftrack API to improve our pipeline even further – they’re simply waiting to be implemented.” Messy Goes to Okido might have been the impetus for Squint/Opera introducing ftrack into its pipeline, but it was also the proof of its benefits. Now the team uses ftrack for every project that enters the pipeline, regardless of medium or client. And it should come in handy in the future, as Squint/Opera continues work on headlining television series along with films and a diverse variety of other digital content.

“It’s impossible to manage a production of this size without asset management and tracking software,” asserted Reyes, recalling the hard work that’s led to Messy Goes to Okido’s success so far. “In our case, ftrack proved to be extremely valuable, and we can see plenty of use for it in the future.”