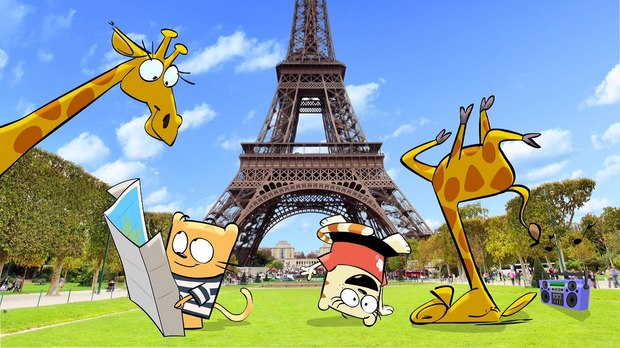 NEW YORK -- Sprout, the first 24-hour network for preschoolers, has greenlit The Ollie & Moon Show, the newest addition to its increasing portfolio of original series. The deal prefaces the first production for the newly created Cottonwood Media, founded by industry veteran David Michel and his partners Zoé Z. Carrera and Cécile Lauritano. The series is slated to join Sprout’s schedule in 2017 and reinforces the network’s continued push to original series.

The Ollie & Moon Show is the delightful tale of two animated cats who travel across the globe introducing kids to serendipity, the joys of unlikely friendships, and global citizenship. The distinctive art style blends live-action with 2D designs.

“Sprout is committed to delivering the very best of children’s television to preschoolers and their families,” said Andrew Beecham, Sprout’s senior vice president of programming. “The Ollie & Moon Show celebrates friendship through two curious cats that learn to appreciate their differences while going on a mad-cap traveling adventures.”

“We couldn’t be happier to launch our first production with a partner as prestigious as Sprout,” said Cottonwood Media founder and producer David Michel. “When we established Cottonwood Media, our goal was to produce premium series & films for a global audience; having Sprout as a partner is confirmation that we are on our way to achieve this goal.”

The Ollie & Moon Show is based on the eponymous book series created by author and illustrator Diane Kredensor. Kredensor is an Emmy Award-winning artist, director and producer whose credits include Pinky and the Brain, Clifford the Big Red Dog and Word World, among others. The series was developed in collaboration with Kredensor by Robert Vargas (Word World, Wonderpets, Zack & Quack, and Henry Hugglemonster), and David Michel (Totally Spies!, Get Blake and Rekkit Rabbit). Kredensor also serves as creative producer.