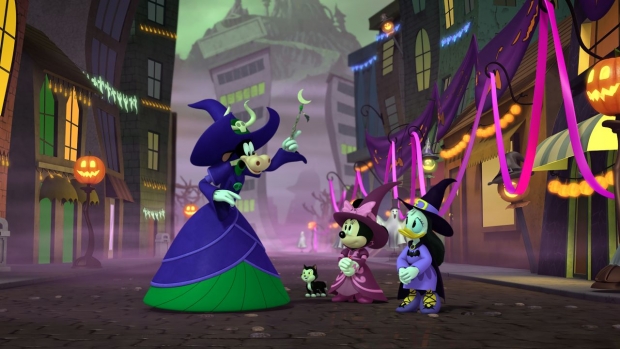 Trick or Treat! It’s that spooky time of year again and Disney Channel and Disney Junior will celebrate Halloween with an extensive slate of themed movies, episodes and specials premiering all during October. Animated highlights include a new animated short-form series inspired by Disney's popular ZOMBIES franchise, and themed episodes of popular series including Marvel's Spidey and his Amazing Friends, and Big City Greens. Also debuting is Mickey's Tale of Two Witches, a new Halloween movie that follows Minnie and Daisy as they attempt to graduate from Witch Academy and team up to defeat a mysterious ghost.

October will also see the premiere of a new “supernatural animated series,” The Ghost and Molly McGee, where Molly, with a little help from her new grumpy ghost companion, tries to make a good impression on the scariest day of all – the first day of school!

Check out the full Halloween programming schedule for Disney Channel and Disney Junior:

Marvel's Spidey and his Amazing Friends:

The Ghost and Molly McGee: