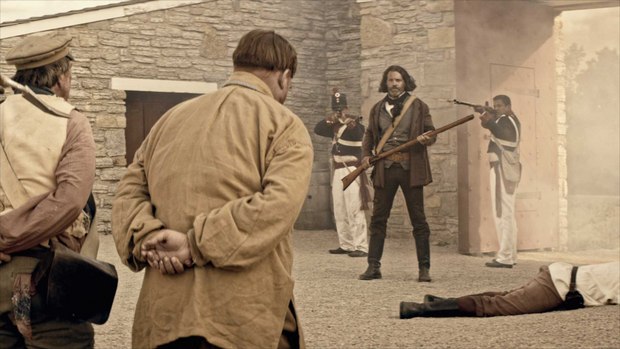 Minneapolis, MN -- Committee Films, led by Executive Producers Andy and Maria Awes, has turned once again to SPLICE for extensive post-production support on the newest season of the original documentary series America Unearthed. Airing on History Channel’s H2, America Unearthed is a huge hit for the network and has become the #1 series of all time on H2. Launched Saturday, November 8th 9ET/10PT, this new season of America Unearthed features design, 3D graphics, visual effects, offline and online edit, color, sound design, and audio mix by SPLICE.

This season of America Unearthed kicked off with the first episode: “Secrets from the Alamo.” The episode features Davy Crockett, an American legend immortalized in frontier folklore for being the last one standing at the Alamo during the fight against Mexico. It was there Crockett is said to have met his heroic end, however, new evidence suggests that may not be the case. An Alabama man contacts Scott Wolter about a land claim allegedly signed by Crockett–nearly 20 years after his death! As Scott investigates, he learns more about Crockett’s life, membership in a secret society and involvement in the Texas Revolution at the Alamo. There, Scott discovers that the history books may be wrong when it comes to Crockett’s fate and that the frontiersman’s enemy, General Santa Anna, may have saved Crockett’s life in a stunning twist of fate. “Collaborating with SPLICE is one of the best parts of working on America Unearthed. We’re continually impressed with how they help us bring these amazing untold stories to life,” remarks Series Producer Maria Awes.

Highlights from SPLICE include VFX work on the re-enactment of the Battle of the Alamo. The SPLICE team co-partnered from off-line editorial through the master phase. “We have enjoyed a very long and successful collaboration with Maria and Andy at Committee Films,” says SPLICE partner Barb Condit. “We are thrilled to see the success they have had with America Unearthed, and we have enjoyed watching our team take on each challenge they give us.”

Committee Films shot at four main locations for this premiere episode of the new season, including The Alamo in San Antonio, Texas where they interviewed renowned author Michael Wallis. The Committee team also shot at Davy Crockett’s replica cabin in Rutherford, Tennessee, and interviewed Joy Bland, a direct descendent of the famed frontiersman. Their filming also took them to Double Springs, Alabama where they shot a family that has a historic document, which could prove that Davy Crockett may have survived the Battle of the Alamo. A unique and historic place, Winston County is unique for a southern town because during the Civil War, the County supported the Union cause. Lastly, they shot at the Scottish Rite Masonic Temple in Minneapolis, interviewing a Minnesota Freemason who is an expert on Davy Crockett and a Texas native. The building filmed in has been a Masonic meeting loge for 99 years and the Scottish Rite is one of the most unique and mysterious branches of the fraternity. Committee Films and SPLICE have collaborated on previous successful documentary specials including Holy Grail in America, Who Really Discovered America? for History Channel and Mystery of Easter Island for NOVA and National Geographic, as well as on a number of commercial and advertising projects that Andy Awes has directed. In addition to America Unearthed, Committee Films is currently collaborating with SPLICE on a show for Travel Channel entitled Top of the World, hosted by international journalist and adventurer Mikey Kay, a new monsters and mythology series for H2, an exciting new docudrama for ABC and a number of television shows and specials for other various networks - including one for Discovery, for its highly-rated Shark Week. The Committee Films/SPLICE partnership starts at the beginning of projects such as America Unearthed, with the SPLICE team helping to build a polished pitch reel, including pre-visualization for vfx shots and full look development for the graphics package.