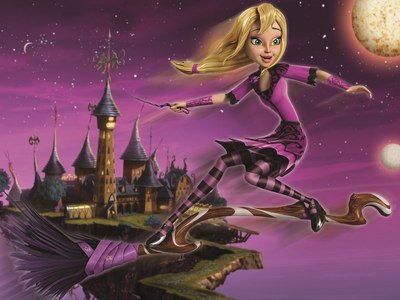 LOS ANGELES -- Splash Entertainment has announced that the company has inked a new deal with TV Film International, a distributor of TV, film, and animated series in Latin America. The announcement was made by Mevelyn Noriega, President of Distribution.  Included are three of Splash’s most popular animated series, including Sabrina: Secrets of a Teenage Witch, Dive Olly Dive (Season 2), and Pet Alien (Season 2).

“We are delighted to be extending our quality programming to the Spanish speaking market through this new deal with TV Film International,” commented Noriega. “This market, among all others, is one of the fastest growing territories and has become a flourishing landscape for children’s entertainment.”

Sabrina: Secrets of a Teenage Witch follows Sabrina, a half-witch and half-human, a super hero who leads two vastly different lives; one disguised as a normal, klutzy high school student and the other as the top sorcery student in the magical world. When her two worlds collide, Sabrina is the only one who has the power to battle her foes, while managing to keep her magical identity a secret from humankind.

Dive Olly Dive follows the underwater escapades of Olly and Beth, two young, unmanned research submarines in training, as they embark in discovering the marvels of the underwater world they live in.  In Pet Alien, Tommy Cadle’s life changes when a group of wild and outrageous aliens crash into his world. As he tries to educate them, the uninvited aliens have their own plans for Tommy.