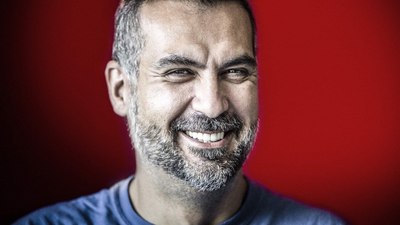 “Cesar has transposed his mastery in sculpting into the digital realm while impressively maintaining the allure and inexplicable nuances of his characters,” says Neishaw Ali, Spin VFX President and Visual Effects Executive Producer, in making the announcement. “His professionalism is only second to his passion. We are very fortunate and excited to have Cesar join our team as Supervisor of Creature and Concept Design.”

“I am thrilled to have joined the SpinVFX family,” commented Dacol, who previously served as Senior Designer & Modeller for Robocop and 300. “We are already creating fantastic work on Disney’s Descendants 2 and I am excited to bring our client’s vision alive and explore the endless possibilities. Magic is in the air and our hands are working quickly to bring it all into reality!”

Dacol has been bringing creatures and characters to life for 20 years. He started his career in the makeup effects industry and transitioned to CG in the mid-90s. From designing the hero dinosaur, Gigantasaurus, in Journey to the Center of the Earth to the Werewolves in The Mortal Instruments, this talented artist has carved a path in animated features such as The Wild (Disney), Happy Feet 2 (Warner Bros.), and live action features that include, Fantastic Four (20th Century Fox), 300 (Warner Bros.), and The Incredible Hulk (Universal Pictures).

Dacol’s reach as an artist has been an inspiration and resource for many of the field’s top professionals: “Before I even touched digital sculpting and ZBrush, I watched and hungered for the talents of Cesar,” said Cloverfield, Star Trek and Prometheus concept designer Neville Page. “From his concept, to form, to execution of detail, I desired to do what he did. And now that I have been using ZBrush professionally for a number of years, I come to realize…I still watch and hunger over the talents of Cesar’s work. He is one of my educators and motivators.”

“Cesar Dacol, Jr. is a true artist whose mastery of his medium showcases his immense and wide ranging design talent,” said Academy Award winner Chris Walas, (The Fly, Gremlins). “His work is typified not only by absolute top level skills but by a superior level of creativity as well as a rich understanding of all of the design elements and considerations necessary to a master artist. Cesar Dacol, Jr, is all that and more.”

“Beautiful, elegant, monstrously fun, Cesar Dacol Jr’s range of form, design, and detail are some of the best in the industry,” commented ILM digital creature sculptor Frank Gravatt, who has contributed work to Captain America: Civil War, The Revenant and Pirates of the Caribbean: Dead Man’s Chest. “What he brings to the art of 3D design is a portfolio of vast knowledge and creativity. A true master of his art!”

“Cesar Dacol Jr.’s body of work encompasses many creative disciplines and many years of tenacious effort,” said special effects make-up sculptor Brian Wade (Stranger Things, Terminator, The Thing). “His ability to infuse his creations with character and realism are top notch and have garnered him worldwide acclaim and respect through the entire film community and also of his peers. His talent allows him to do more than simply define a characters look, he can tell its story.”

Dacol will lead the concept team at Spin and with a focus on creature and character design. He is presently working to deliver The Disney Channel’s movie Descendants 2 and the second season of sci-fi hit TV series The Expanse from Alcon Entertainment.