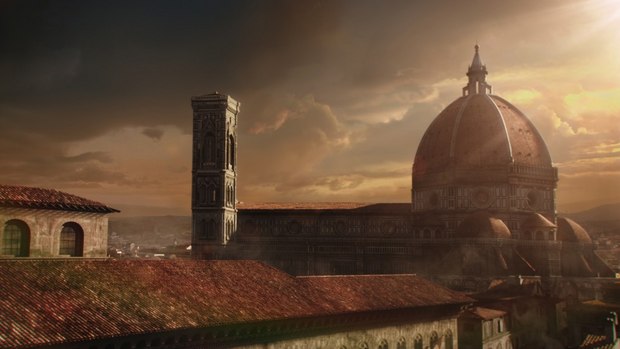 TORONTO, CANADA -- Spin VFX, which has created visual effects for over 75 features and 15 television series including HBO’s Game of Thrones, has delivered over 300 shots to recreate Leonardo DaVinci’s world in Renaissance Italy.

Their work on Season 3 of the Emmy award-winning TV series, Da Vinci’s Demons, was led by twenty-year veteran VFX Supervisor Wesley Sewell, Supervising VFX Producer George Macri, and VFX Producer Colleen Jenkinson. The pair led the Spin team in the production of digital environments with mixed 2D and 3D solutions which were used to create the shots of famed Italian locales in and around Florence; including the Duomo, the Ponte Vecchio, Santa Maria church and stunning views down the Arno Rive. The environments were augmented with CG support, cannon balls, explosions, dream sequences, to illustrate Leonardo Da Vinci’s use of clever contraptions and weapons to win battles and woo women.

“It was an honor to work with such an incredibly talented team. Tom Horton was brilliant to work with. His ability to collaborate and motivate the team to create stunning visuals was inspiring,” says Neishaw Ali, Spin President and Visual Effects Executive Producer (The 5th Wave, Game of Thrones).

“Our goal was to create not just a gritty realism, but also a naturalistic beauty. The team used HDRI and IBL to create photo-realistic light and artistic talents to bring in the light of the master painters of the time. We did Leonardo proud!” commented Wesley Sewell, VFX Supervisor (Point Break, Thor).

Da Vinci’s Demons follows the “untold” story of Leonardo DaVinci during his early years in Renaissance Florence. As a 25-year old artist, inventor, swordsman, lover, dreamer and idealist, he struggles to live within the confines of his own reality and time as he begins to not only see the future, but invent it.

Produced by BBC Worldwide, the 10-episode series is distributed by Starz.