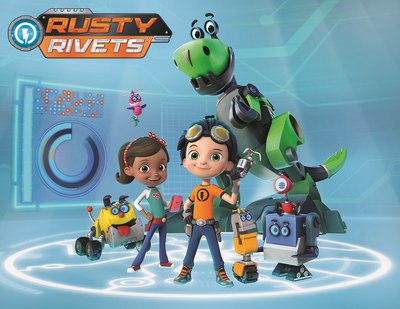 Rusty Rivets will premiere immediately following an all-new primetime PAW Patrol special, “All-Star Pups,” at 7:00 p.m. (ET/PT) and new episodes will continue to roll out this year on Nickelodeon, the number-one network for preschoolers and kids 2-11 year to date.

In Rusty Rivets, 10-year-old Rusty, along with his best bud Ruby, invents his way out of every jam by repurposing spare parts and found objects into the wildest, coolest, most awesome contraptions ever. The series encourages kids to use their imaginations to design and create fun new gadgets and inventions.

In the series premiere, “Rusty’s Rex Rescue/Rusty’s Park N’ Fly,” Rusty’s friend Liam gets trapped on top of a tall stack of junk in Rusty’s Recycling Yard. To rescue Liam, Rusty and Ruby design a Jurassic robot who ultimately becomes their new trusty friend Botasaur. In the next adventure, Rusty and his friends must bring Mr. Higgins’ remote control plane down safely when it can’t land. Together, they must engineer a daredevil rescue to save the plane.

Nickelodeon currently has all-new full-length episodes of Rusty Rivets available on select digital platforms. NickJr.com also features two brand-new online games inspired by the show: “Penguin Problem,” in which players run through the Recycling Yard collecting escaped penguins and building creative tools to transport them safely back home; and “Combine it and Design it,” which offers players four different machine models that they can design and build with Rusty. Episodes will be available on the Nick Jr. App, NickJr.com and Nick VOD platform beginning Monday, June 20.

Rusty Rivets is the sixth series from Spin Master Entertainment and follows on the success of PAW Patrol and Bakugan Battle Brawlers. The new series is overseen by executive producers Ronnen Harary and Laura Clunie.