Additional animation highlights include ‘Ralph Breaks the Internet’ and ‘Spider-Man: Into the Spider-Verse’ as well as production sessions featuring Commercials and AAA Game Design. 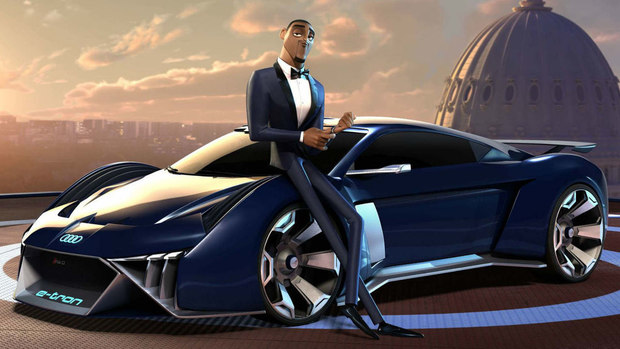 Ludwigsburg, GERMANY -- Animation is in the spotlight at FMX 2019, the international conference on Animation, Effects, Games and Immersive Media running April 30 through May 3 in Stuttgart, Germany, with additional speakers and presentations announced for Spies in Disguise, Ralph Breaks the Internet, Incredibles 2, Manou the Swift and Spider-Man: Into the Spider-Verse, as well as production sessions on Commercials and AAA Game Design.

Also unveiled today is the FMX 2019 Games Trailer, Kinky Kitchen, which was created by students at the Filmakademie‘s Animationsinstitut. This year, for the first time, FMX is releasing four different trailers, representing the four different areas of focus at the Conference. Each of the areas -- Animation, Effects, Games and Immersive Media -- has been represented with their own trailers, each of them unique in technique, style, and story. Kinky Kitchen is the fourth FMX 2019 trailer after Wonderful World, representing the VFX track, CatPlanets, representing Animation, and Tiefenrausch, FMX 2019’s Immersive Media trailer.

For anyone who’s ever wondered what the kitchen utensils get up to when nobody is at home, this trilogy of short clips for Kinky Kitchen will reveal the juicy truth:

Learn more about the newly announced offerings at FMX 2019 below:

The Art of Animation – Ralph Breaks the Internet, Spies in Disguise & Manou the Swift

In The Art of Animation track, Animator Jacob Frey and Crowd Artist Joyce Tong (both Walt Disney Animation Studios) will share some of the challenges they encountered when creating “Ralphzilla” for Ralph Breaks the Internet. Blue Sky Studios’ Head of Layout James Williams will give an inside look into the studio’s upcoming action packed, buddy comedy, Spies in Disguise. Andrea Block and Christian Haas (both LUXX Studios/LUXX Film) will dive into the details of their first animated full CG feature film Manou the Swift.

Curator Christophe Hery, Research Scientist at Facebook Reality Labs, brings together four experts for the Stylized Lighting & Rendering track that will discuss various technical and artistic means of achieving appeal and explore the foundation of colors as a starting point to stylization.

Bret St. Clair (Sony Pictures Imageworks) will kick off the track by exploring the look development of Spider-Man: Into the Spider-Verse. Erik Smitt, Director of Photography at Pixar Animation Studios, will explain how a stylized approach inspired by live-action cinematography came into play when creating the look of Incredibles 2. Christos Obretenov, CEO and Shading Architect at Lollipop Shaders, will discuss the development of custom shading plugins that provide non-photoreal shading & rendering in modern production renderers. Last but definitely not least, VFX Supervisor Tarek Elaydi, (Arctiq Circle) will survey the physics and chemistry of color, and how these interactions are represented in today’s path-tracing renderers.

In the shortest timeframe possible, a strong commercial will draw attention to products and services by bringing cutting-edge design, execution and storytelling to its moving images. The Commercials track at FMX 2019 presents a selection of the latest and greatest work in this field from the past year.

Adam Droy, VFX Supervisor (The Mill), will give an insight into the creation of the spot Nike - Awaken the Phantom. In their talk Wonderwoman and Chester Cheetah!, unexpected postproduction’s Managing Director Alexander Kiesl and Head of VFX Steffen Hacker will show a sneak peek of their shoots in Iceland, London, Warshaw, and Cairo. The making of Penny’s Christmas Doesn’t Need Much. Only Love will be the topic of the talk by Glassworks Amsterdam’s Rüdiger Kaltenhäuser (Director/Head of 3D) and Darren Macpherson (Director/VFX Supervisor & Senior 3D Artist). Piglet Lucky, star of the VES-Award-nominated commercial Best Friend for PETA, will stand in the limelight in a presentation by CG Artist/Associate VFX Supervisor Emanuel Fuchs, Animation Supervisor Bernd Nalbach and VFX Producer Francesco Faranna (all Mackevision Medien Design and alumni of Filmakademie’s Animationsinstitut). Selcuk Ergen, Head of Effects at MPC Advertising, will present a behind the scenes look at the extensive VFX work that was involved in bringing Ridley Scott’s otherworldly ideas in Hennessy’s The Seven Worlds to life.

The AAA Game Design track – curated by Simon Jon Andreasen, Head of Animation and DADIU, The National Film School of Denmark – will highlight visual designers working on recent highly successful games and show how they craft the games, and where they believe the future will take design and creativity.

Soren Lundgaard, CEO of Ghost Ship Games, will explain how his Deep Rock Galactic team manages to deliver hundreds of hours of procedurally generated caverns for up to four players to explore, pillage and survive through while keeping players engaged and challenged – without using multimillion dollar budgets. Mark Estdale, founder of OM, will share how his team works with the power of early casting, creates hundreds of hours of immersive dialogue and performances for story driven games like Horizon Zero Dawn. Curator Simon Jon Andreasen, being an experienced AAA developer himself, asked friends and colleagues from the world’s leading AAA studios how they design fun evolving games, without just throwing endless upgrades at the player. In his talk Keeping it Fresh – Designing Versatile Mechanics that Never Grow old he will present the results of his survey.

There are two major items of news regarding the FMX Forum. FMX is thrilled that Epic Games, the studio behind Unreal Engine, will be a Main Partner for 2019. Furthermore, the FMX Marketplace and Recruiting Hub are sold out.

Tickets for FMX 2019 are available in the online ticket shop on www.fmx.de.