Special Event: ‘Only a Child’ Virtual Screening and Q&A 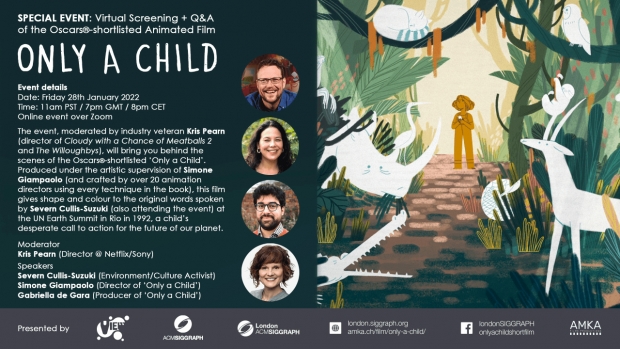 Join director Simone Giampaolo and producer Gabriella de Gara for a virtual screening and Q&A of their Oscar-shortlisted animated short film, Only a Child, tomorrow, Friday January 28 at 11 am PST, presented by Amka Films in partnership with the VIEW Conference and London ACM SIGGRAPH.

You can find the event here.

You can watch the film until February 8th on the short films distribution platform KIS KIS – keep it short.

This online event, moderated by Kris Pearn (director of Cloudy with a Chance of Meatballs 2 and The Willoughbys), will take you behind the scenes of the award-winning film. Produced by de Gara and prominent Swiss Producer Tiziana Soudani (1955-2020) for Amka Films under the artistic supervision of Giampaolo, the short was created by over 20 animation directors using every imaginable technique; the film gives shape and color to the original words spoken by Severn Cullis-Suzuki (also attending the event) at the UN Earth Summit in Rio in 1992, a child’s desperate call to action for the future of our planet.

In the film through eloquent images and powerful animated allegories, the young animators project their message through art. Each artist used their own unique style and technique to bring a segment of Severn’s speech to life: stop-motion, CGI, traditional 2D, cut-outs, sand animation and paint on glass, and more.

Only a Child has been selected by over 120 festivals worldwide, gaining recognition and winning many prestigious awards including Best in Show at SPARK Animation Festival, Nomination for 2021 Swiss Film Prize, Audience Choice Award at SIGGRAPH 2021, Best Youth Film at Festival Regard, Best Film at 3D Wire Fest, Special Achievement Award at VIEW Conference, and the Special Mention at the 28th Stuttgart International Festival of Animated Film, where the jury noted:

“Only a Child is a collaborative project celebrating the plethora of designs, styles, and techniques that a century of animation has brought to the World. By adding animation to an important voice from the past, Only a Child reminds us all that only by believing in and acting as one responsible global community, there is a way forward for humanity on Earth”. The international VIEW Conference, Italy’s premiere event for Computer Graphics, Interactive and Immersive Storytelling, Animation, Visual Effects, Games, VR, AR, and Mixed Reality, brings top professionals from those fields to the beautiful baroque city of Torino, Italy for a week of talks, presentations, and workshops. The 2022 VIEW Conference will take place from October 16 to 21 in Torino’s state-of-the-art OGR venue and virtually.