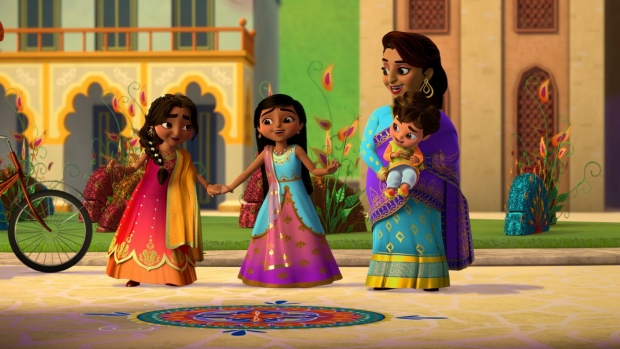 Disney Channels has just shared a special Diwali greeting from some of the stars of their hit preschool series, Mira, Royal Detective - Kal Penn (voice of Mikku), Utkarsh Ambudkar (voice of Chikku), Aasif Mandvi (voice of Mira's dad, Sahil), Karen David (voice of Shilpa, Ashima and Rubi), Parvesh Cheena (voice of Manish), Sonal Shah (voice of Poonam) and Leela Ladnier (voice of Mira) - talking about the upcoming Diwali holiday and what it means to them.

Diwali, which starts November 14, is the Indian festival of lights, usually lasting five days and celebrated during the Hindu Lunisolar month Kartika. One of the most popular festivals of Hinduism, Diwali symbolizes the spiritual "victory of light over darkness, good over evil, and knowledge over ignorance."

Disney also shared a fun dance tutorial from series' choreographer Nakul Dev Mahajan as he demonstrates some of Mira's favorite dance moves from the series, including a few from the Diwali episode, which is currently airing on Disney Channel and Disney Junior.

Created for kids age 2-7 and their families, the mystery-adventure tells the story of Mira, a brave and resourceful young commoner who is appointed to the role of royal detective by the queen. The series centers on the young sleuth, who along with her friend Prince Neel, creative cousin Priya, and comical mongoose sidekicks Mikku and Chikku, set out on mystery-solving adventures that highlight critical thinking and encourage deductive reasoning for young viewers. Each episode features two 11-minute stories that celebrate the cultures and customs of India by incorporating authentic food, fashion, language, and art. Music and dance, so important to Indian culture, play an integral role in the show; each episode features at least one original song and dance number that showcases India’s extensive cultural diversity.