Visual effects festival, conference and job fair to include presentations on the invisible effects of ‘Birdman,’ ILM’s work on ‘Captain America: The Winter Soldier,’ the making of ‘Dawn of the Planet of the Apes,’ the miniature effects of ‘Interstellar,” and more. 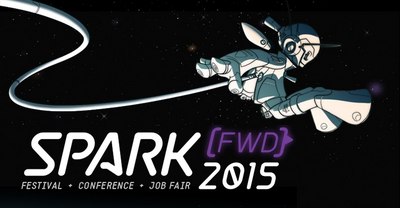 Featuring two full days of conference panels, lectures and presentations, SPARK FWD is sure to ignite the imagination of all those attending. Evening film screenings will highlight the very best in film, video and animation from professional and emerging filmmakers.

Individual Sessions are $20 + tax; Full Conference Passes including all daytime and evening panels are $175 + tax.

Back to the Future Anniversary Panel
Dean Cundey, Kevin Pike and Andrew Probert (US)
Saturday January 31 at 7:30 pm
2015, is the year we have been waiting for our whole lives. The future is now the present. Yes, Back to the Future, the film that made DeLoreans cool, popularized the concept of flux capacitors and made incestuous attraction improbably hilarious will be celebrating its 30th anniversary. To commemorate Back to the Future, we will have the director of photography, Dean Cundey, the DeLorean Time Machine designer and special effects supervisor, Kevin Pike, and original BTTF storyboard and concept artist, Andrew Probert. We’ll have a DeLorean on site to add some panache to the party. So don’t forget to wear your puffy vests and bring along your hoverboards for an evening of great fun.

Creating the Invisible Effects of Birdman
Ara Khanikian, Rodeo FX (CA)
Saturday January 31 at 3 pm
When many Hollywood films are visual effects spectacles, Birdman’s visual effects shots are seamless and mostly invisible. That’s what makes them so great. Rodeo FX Visual Effects Supervisor Ara Khanikian noted, “People don’t realize how much work there is in Birdman. It’s there to support the story, which is fantastic.” It’s no wonder that Birdman’s Ara Khanikian and the team at Rodeo FX have been nominated by the Visual Effects Society for Outstanding Supporting Visual Effects.

Hitting the Road On Mars: Reaching Out Into the Solar System
Nagin Cox, NASA-JPL (US)
Saturday January 31 at 11 am
Vancouver’s SPARK FWD Festival is especially pleased to have Nagin Cox, Mission Lead for Mars Science Laboratory (MSL) share with us the latest discoveries of the Mars Science Laboratory Curiosity Rover. Nagin Cox takes the fiction out of science, and tells us the real story, as found, roving about on Mars, while sparking the imagination of both the film and scientific communities.

The Making of The Hobbit: Battle of the Five Armies
R. Christopher White and David Clayton, Weta Digital (Wellington, NZ)
Friday January 30 at 1 pm
The hobbits are diminutive and the dwarves short, but there is nothing small in Director Peter Jackson’s cinematic vision of JRR Tolkien’s Middle-earth. For almost 15 years, Weta Digital has come to define the state of the art in visual effects. Part of the core effects team at Weta are Visual Effects Supervisor R. Christopher White, and Animation Supervisor David Clayton. Both are VFX award nominees and winners with impressive credentials. Just as The Hobbit ends, not with a whimper, but with an epic battle royale, Mr. Clayton and Mr. White will bring it on, for a little smackdown. The Hobbit: Battle of the Five Armies has received BAFTA and Visual Effects Society nominations for Best Visual Effects.

Interstellar: The Miniature Effects
Ian Hunter, New Deal Studios (US)
Friday January 30 at 5 pm
Interstellar. The only title among 2014’s top 10 worldwide earners that is not a remake, sequel, reboot or adaptation, but rather an entirely original film, something that is increasingly rare among the output of the big studios. New Deal Studios have been a part of the Chris Nolan’s most critically and/or commercially successful films of the 21st century: Batman Begins, The Prestige, The Dark Knight, Inception, The Dark Knight Rises, and now Interstellar. Nominated for the 2015 Academy Awards for Best Visual Effects, Ian Hunter, the creative director, award-winning visual effects supervisor and co-founder of New Deal Studios, will share with us the making of the hand-crafted bigatures for Interstellar. Interstellar has also received BAFTA and Visual Effects Society nominations for Best Visual Effects.

Maleficent: Fantastical Faeries and Deadly Dragons
Catherine Mullan & Dave Seager, MPC (Vancouver & London, UK)
Saturday January 31, at 1 pm
Maleficent explores the untold story of Disney's most iconic villain from the classic Sleeping Beauty and the elements of her betrayal that ultimately turn her pure heart to stone. MPC's VFX Supervisor, Dave Seager will present the team's work on the VFX for the movie including a host fantastical faeries, fierce dragons, and otherworldly environments. Catherine Mullan, Animation Supervisor at MPC, will then present a behind-the-scenes look at the character animation from Maleficent. From the fluffy to the formidable, she will share how this array of creatures were brought to life. Discussing with the audience her insight and experience, as well as the creative and technical challenges encountered along the way.

Cinematic Virtual Reality: The Mission
Matthew Gratzner, New Deal Studios (US)
Saturday January 31 at 9 am
Hollywood is always looking to improve the medium of film with new technology. Today, the art of Virtual Reality (VR - creating the perception of immersion in a 3D environment) is starting to take off and Hollywood wants it. With companies like Google, Samsung and Oculus at the leading edge of hardware, every major studio is dipping a toe in the VR water. As a Visual Effects Supervisor and co-founder of New Deal Studios, Matthew Gratzner will be on hand to present, explain and to demonstrate the future of virtual reality. It will spark your imagination and leave you buzzing with excitement.

Please Look After This Bear; The VFX of Paddington
Pablo Grillo, Framestore (London, UK)
Friday January 30 at 3 pm
One of the most beloved children’s literature characters of all time, Paddington Bear, comes to the big screen this month. Bringing any CG character to life in a believable way is always a challenge, but taking on such a famous, marmalade-eating bear like Paddington makes it much harder. Framestore Animation Director Pablo Grillo will discuss how he and the visual effects team designed and animated Paddington so he could inhabit a live-action world as a believable, talking bear while remaining faithful to the books.

For years visual effects were limited to big budget productions; the work was intense, specialized and expensive. But over the last few years, effects have slowly started to appear in independent productions, thanks in part to artists who are interested in sharing their talent, often freelancing on their spare time on passion projects.

For this very special presentation, we bring together local VFX artist Zach Lipovsky, who made his big screen debut on the 90s reboot Leprechaun Origins and recently lent his talent to the festival hit Afflicted, writer/director Scott Belyea, a ten-year veteran of the Vancouver Film Industry who has made a number of effects heavy short films and Zachary Cole, a VFX supervisor who has worked on everything from Star Wars: Episode III Revenge of the Sith to short films like The Sand Storm, to talk about the challenges and advantages of using VFX in short films and indie productions.

This presentation is a must for filmmakers with questions about how to afford and incorporate effects into your first or next project!

Program includes: a new film by Jean Pierre Jeunet (Amelie), The Young and Prodigious T.S. Spivet; his 1995 feature, City of Lost Children, a 30th Anniversary Back to the Future screening, and a Late Night Snacks shorts program of local and international films.

SUIT UP & BOOST YOUR CAREER
Saturday, January 31 from 8:30 am to 5 pm
The SPARK FWD Job Fair is free to attend and gives VFX and animation pros and students, a rare and unique opportunity to connect with some of the world’s best film and television studios. Don’t underestimate the importance of the SPARK FWD Job Fair to your creative career. It may be small, but it’s mighty! It will give you one-on-one time with studios such as Atomic Cartoons, CoSA VFX, Digital Domain 3.0, Double Negative, Framestore, Gener8 Media Corp., Image Engine Design, Industrial Light & Magic, Method Studios, Moving Picture Company, Nerd Corps Entertainment, Rainmaker Entertainment and Zoic Studios.