The deadline for submissions to the 8th annual Spark Animation Festival, to be held October 21-25, is September 7, 2015. 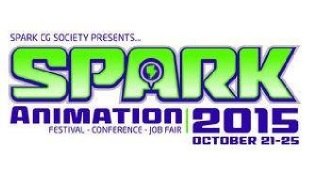 The 8th annual Spark Animation Festival, hosted by Spark CG, takes place this year October 21-25. Part conference and part festival, SPARK ANIMATION thrives on bringing together industry experts with newcomers, and that principle extends into the festival which provides a showcase for both established filmmakers and fresh new talent. With an eclectic mix of styles and languages, SPARK ANIMATION has become the premiere animation festival in Vancouver.

SPARK ANIMATION 2015 will feature a series of regional, national and international short and feature films, filmmaker workshops and mixers.

Organizers are looking for animated projects from all over the world:

Hybrid projects (animation and live-action) and projects using advanced imaging technologies such as Stereoscopic 3D, HFR, UltraHD, are also accepted but may be considered for SPARK FWD 2016, to be held in early 2016, at the discretion of the jury.

The regular deadline for submissions is September 7, 2015. The submissions page is here: https://filmfreeway.com/festival/SPARKANIMATION