Call for submissions for Vancouver conference and festival running October 25-28 extended to September 10. 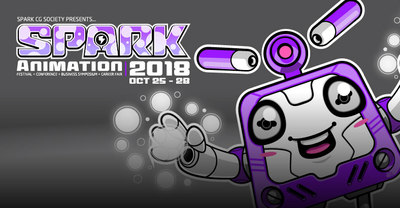 VANCOUVER -- Spark Computer Graphics Society is once again attracting top talent to Vancouver for SPARK ANIMATION 2018, a celebration of innovation and inspiration in the international field of animation, coming up October 25-28.

Along with a conference, business symposium, and career fair, SPARK ANIMATION 2018 will again host an annual film festival, honoring animated features and shorts selected by a diverse list of independent and studio filmmakers, executives, and industry leaders. As a major highlight in its 10-year history, in 2014, SPARK ANIMATION introduced festival film submissions and selected its first jury comprised of animation experts.

Sylvain Provencher, president of Spark CG and Vancouver ACM SIGGRAPH, is pleased with the festival’s track record in selecting films that have gone on to win industry accolades. “We are proud to bring top innovators in animation to Vancouver to judge some of the world’s finest films in this category,” he said. Several films selected in 2017 went on to be nominated for Best Animated Short Film at the Oscars, including Garden Party, Negative Space, and Revolting Rhymes.

Over the years, the Jury has featured directors, producers, educators, independent creators, studio visionaries and Oscar winners. The 2018 Festival Jury is no exception and includes the following industry luminaries:

Submissions are currently open for SPARK ANIMATION 2018. In its 10-year history, the festival has proudly honored diversity and inclusion, ensuring a mix of animation styles, different languages, a diaspora of cultures, and a wide range of CG storytelling from the traditional to the abstract.

Regular submission deadline is August 27, 2018, while the extended deadline is September 10, 2018. Visit the SPARK CG Submissions page for details.

Jury selections for the Film Festival 2018 will be announced early this fall.