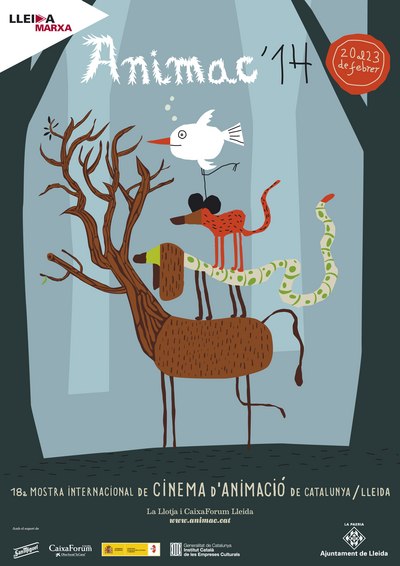 Animac, the International Film Festival of Animation in Catalonia, celebrates its 18th birthday by devoting it to hybrid animation and its capacity to mix and integrate all kinds of audiovisual formats.

The Festival will be held in Spain February 20-23, 2014. Organized by Lleida City Council and directed by curator Carolina López, Animac 2014 reaffirms its commitment to all audiences: four days full of animation screenings -- with more than 235 selected pieces -- exclusive lectures, and special sessions targeted at professionals, students, connoisseurs, families and children.

Hybrid, The Spirit Of Our Times

Animation has benefited all possible media, mixing and merging with many languages, techniques and formats: we defend our HYBRID theme as a symptom of the spirit of our times. Thus, Animac’s full program and all its sections are infused with hybrid animation.

Two special short film sessions will feature the most recent examples of hybrid animation, such as The Vein (by BCN-based studio DVEIN), Rosto’s Lonely Bones or G/R/E/A/S/E, one of the most experimental pieces by Spanish artist Antoni Pinent. A retrospective session will include some pioneer works, such as Walt Disney’s Alice’s Wonderland (1923), which combined live-action and traditional animation, and the slapstick short films of Charley Bower, as one of the most original – and forgotten – visual creators of his time. Michael Gondry’s latest feature film, L’écume des jours – known internationally as Moon Indigo – will be the icing on the cake, considering its use of mixed techniques and other Gondry trademarks.

In relation to Animac’s theme, our special guest will be British animator Chris Shepherd (1967, Liverpool, UK), who always maintained an intimate relationship with live action: an alchemical mixture of sincere, traditional and terrifying stories, full of black comedy. A mutant and multidisciplinary artist, Shepherd forged and refined his hybrid style thanks to the support of Channel 4 television. This is where he made his directorial debut, The Broken Jaw (1997), and two key pieces in his film career, Dad's Dead (2003) and Who I Am and What I Want (2005), within the short film incubator animate! He even became commissioner of the Random Acts short film initiative, which includes works by colleagues such as David Shrigley or Phil Mulloy and his own pieces, such as Drillerfiller (2012). A retrospective screening and a master class will explore his entire filmography, including his latest short film, The Ringer (2013), where Shepherd has returned to the dramatic and autobiographical territory.

Moreover, Animac will welcome the exceptional Jiří Barta (1948, Prague), one of the latest masters of Czech stop-motion and hybrid animation, for a special master lecture and a retrospective session of his work. Barta will also present Yuki Onna (2013), a Czech-Japanese co-production in which he introduces digital techniques to integrate live action and wax animation. Three monographic sessions will show and share Barta’s work. He began his career under the umbrella of the Czech communist government, which funded the work of new artists. After a first phase of cut animation, Barta opted for stop-motion with pieces such as the nostalgic Zanikly vet rukavic (The Extinct World of Gloves, 1982) or the mesmeric Ballad or zelemén drevu (The Ballad of the Green Wood, 1983). The film Krysař (The Pied Piper of Hamelin, 1985), an evil and expressionist version with puppets from the classic tale by the Brothers Grimm, was one of the peaks of his career. Barta continued to experiment with shorts, such as the vampiric Poslední lup (The Last Robbery, 1987) or Klub odlozenych (The Club of the Rejected, 1989). Ironically, the collapse of communism ended the whole system of artistic funding, and Barta remained inactive as a filmmaker for almost 20 years. From this period, we should note the unfinished film Golem, with just a trailer available. Finally, Barta returned in full force with the film Na pude aneb Kdo má dneska narozeniny? (2009), an unusual success that was screened in North America under the title Toys in the Attic, which mixes claymation, traditional animation and pixilation.

Behind “The Amazing World of Gumball”

Ben Boquelet and Mic Graves, the makers of the Cartoon Network’s award-winning series The Amazing World of Gumball, will join us this year to give a special lecture on Gumball’s creative process and its use of mixed animation: 2D, 3D, live action and even puppetry. Unaired episodes from the upcoming 3rd season will be screened for all audiences.

Once again, Animac promotes Spanish talent with a series of special lectures. They are animators and creators in the spotlight, such as Marc and Xavi Terris, from Barcelona: the young twin animators of the Annie-nominated indie-game Tiny Thief, licensed and distributed by Rovio. On the other hand, creators like experimental artist Antoni Pinent – and his reedited, animated version of the Randal Kleiser hit musical GREASE, re-titled G/R/E/A/S/E – or FX specialist Àlex Villagrassa – now working with Terry Gilliam and his new Quixote project – will give special lectures in their hometown, Lleida.