Celebrating the film’s 20th anniversary, The Tune Squad returns with Michael Jordan, Bugs Bunny, Bill Murray, Daffy Duck and more as they face off against the Monstars in the unforgettable ‘90s classic. 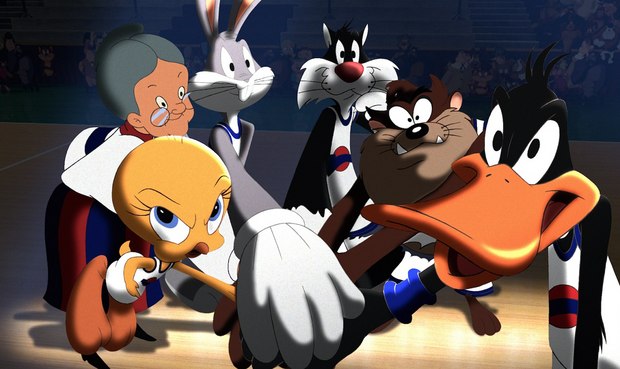 The Tune Squad will face off against the Monstars and movie fans will journey back to the ‘90s when Michael Jordan’s big-screen blockbuster Space Jam comes back to big screens nationwide for two special days.

To celebrate the 20th anniversary of the beloved classic, Fathom Events and Warner Bros. will present the return of Space Jam to the screen on Sunday, November 13 at 2:00 and 7:00 p.m. and Wednesday, November 16 at 7:00 p.m. (all local times). The showings will be accompanied by even more Looney Tunes merriment: a rare big-screen presentation of the cartoon short, I Tawt I Taw a Puddy Tat, prior to the feature content.

It’s an unforgettable combination of live action and animation that legendary film critic Roger Ebert called “delightful, a family movie in the best sense (which means the adults will enjoy it, too).” Tickets to the 20th anniversary showings of Space Jam can be purchased online by visiting www.FathomEvents.com or at participating theater box offices. Fans throughout the U.S. will be able to enjoy the event in more than 450 select movie theaters. For a complete list of theater locations visit the Fathom Events website (theaters and participants are subject to change).

In Space Jam, the evil alien theme-park owner Swackhammer (voiced by Danny DeVito) needs a new attraction at Moron Mountain, which is losing popularity – so he develops a plan to capture the Looney Tunes as his newest entertainment. But when his nefarious Nerdlucks head to earth to kidnap Bugs Bunny and the rest of the Looney Tunes, Bugs challenges them to a basketball game. The aliens then steal the powers of NBA basketball players, including Larry Bird and Charles Barkley, leading Bugs to recruit super-legend Michael Jordan himself to transform the crazy characters into the formidable Tune Squad.

“Space Jam has been a family favorite for the last 20 years and is sure to remain so for the next 20 and beyond,” Fathom Events Vice President of Studio Relations Tom Lucas said. “This event is the perfect chance for audiences of all ages to view the film as it was meant to be seen – on the big screen.”