The English-language production of Space Dandy now underway is set to be broadcast on Adult Swim on January 4, 2014. 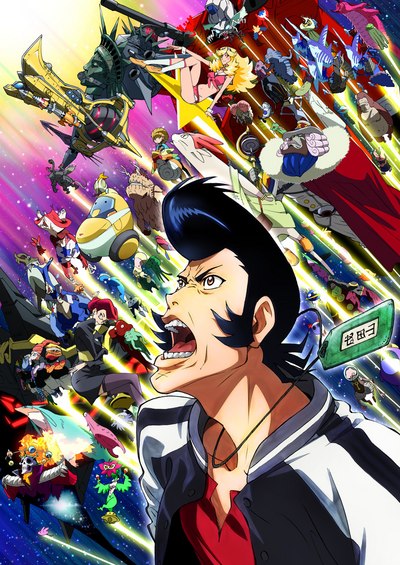 Tokyo -- Get ready to blast off with Space Dandy, a dazzling new anime from the entire creative team behind Cowboy Bebop.

Space Dandy is a dandy in space! This dreamy adventurer with a to-die-for pompadour travels across the galaxy in search of aliens no one has ever laid eyes on. Each new species he discovers earns him a hefty reward, but this dandy has to be quick on his feet because it’s first-come, first-served! Accompanied by his sidekicks, a rundown robot named QT and Meow the cat-looking space alien, Dandy bravely explores unknown worlds inhabited by a variety of aliens. Join the best dressed alien hunter in all of space and time as he embarks on an adventure that ends at the edge of the universe!

Space Dandy will start airing on TV in Japan at 11:00pm on January 5, 2014, on Tokyo MX, followed by TV Osaka, TV Aichi and BS Fuji. In the meantime, the series will start on Adult Swim’s Toonami block at 11:30pm on January 4, with English audio in the US.

Other countries and regions also plan to simulcast the series:

Space Dandy is set to be Animax Asia’s latest simulcast anime title. Across Southeast Asia, Space Dandy will premiere on January 5th at 10:00pm (SG, MY, PH, HK, TW) / 9:00pm (JKT, TH) first and exclusively on Animax, in a same-time-as-Japan broadcast. In addition, Space Dandy will debut in India on the same day as the Japan premiere at 10:00pm (IST) on Animax. The series will air with local language subtitling and an option of English dubbed audio on Animax.

Animax Korea has also licensed Space Dandy for South Korea. The channel will launch a Korean-subtitled version of the series simultaneously with Japan in January on their live channel and web-based VOD platform, SPINA.

Australia / New Zealand fans will be able to watch the series via Madman’s Screening Room (madman.com.au/videos) at the same time as the Japanese broadcast. The series will be streamed in Japanese with English subtitles. English dub broadcast information will be confirmed at a later date.

The series has been licensed to Anime Limited for English and French-speaking countries and regions in Europe. TV and online broadcast schedules are to be managed by Wakanim, with other outlets under consideration.

AV Visionen had gained the license for German-speaking countries and regions, and they plan to simulcast the series with German subtitles on their own streaming platform.

The English-language voice cast for the series has also been announced: