The hour-long special follows the vaccination roll-out in South Park, poking fun at the disbursement process as well as the recently enacted ‘The Muppet Show’ viewing disclaimer. 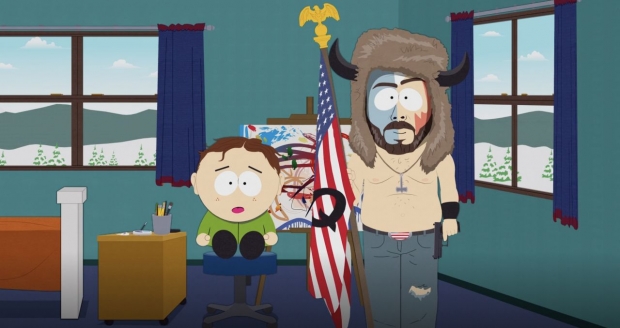 In true Trey Parker and Matt Stone fashion, the newest hour-long South ParQ Vaccination Special offers not only light-hearted controversy, but the opportunity to objectively (or subjectively) think about and discuss what we learned today, or any day, about current events. The Special opens with a disclaimer, poking fun with typical South Park subtlety at the warning recently placed on The Muppet Show by stating, “Like The Muppets, this show should not be watched by anyone.” The message also touches on the highly charged issue of censorship, along with cancel culture, noting that viewing controversial material with the ability to discuss it is infinitely better than simply erasing it.

The Vaccination Special marks the first new offering from South Park Studios since the hour-long Pandemic Special, which aired in September 2020. Has South Park been hit hard by the pandemic, or do Parker and Stone feel like other content just isn’t important right now? As for what crazy shenanigans we witness in the newest Special, the outlet explains, “The citizens of South ParQ are clamoring for the COVID-19 vaccine. A hilarious new militant group tries to stop the boys from getting their teacher vaccinated.” Let’s not forget, the South Park folks themselves are no stranger to censorship; remember back in 2019 when the Chinese government removed all online references to the show in China, including clips, episodes, and discussions, in response to the “Band in China” episode? Lest you forget the epic episode, in one story arc, Randy Marsh gets arrested for selling marijuana in China and is sent to a work camp patterned after the Xinjiang Provence camps Western sources claim are holding more than one million Chinese Muslims for forced “re-education,” a claim Chinese authorities deny. Randy runs into fellow prisoner Winnie the Pooh, a not-so-subtle jab at Chinese censors’ ongoing ban on imagery of the gentle, honey-loving stuffed animal after online mocking of president Xi Jinping’s slightly rounded bear-shaped physique using the iconic character became a viral sensation several years ago. In the second arc, Cartman, Stan, Butters, and Kenny form a heavy metal band that gains enough popularity to attract a manager; the script of a film they plan to make keeps changing in their hopes of securing Chinese distribution. In one hilarious moment, Stans says, “Now I know how Hollywood writers feel," while a Chinese guard stands over him as he works on the script. In another shot at Disney, Mickey Mouse makes an appearance to ensure Marvel and other Disney cartoon characters make nice with Chinese authorities.

Soon after the complete Chinese content cancel, Parker and Stone tweeted their sort of apology, welcoming Chinese censors into their hearts, claiming they love money more than freedom and democracy, and Xi Jinping doesn’t look like Winnie the Pooh.

Watch the South ParQ Vaccination Special for free now, and be prepared to have your views, and sense of propriety, challenged.