Comedy Central's one-hour supersized episode airs September 30; as the kids head back to school, nothing is remotely normal, including Eric Cartman. 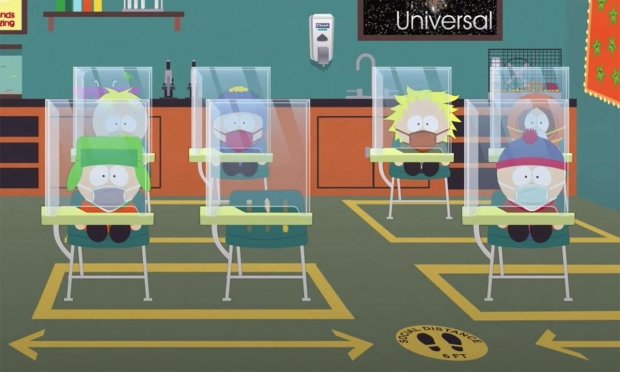 The people of South Park are taking on the COVID-19 pandemic as only they can in a one-hour “Pandemic Special” premiering Wednesday, September 30.

As Randy Marsh reveals a “Pandemic Special” that reeks of some ill-conceived and completely inappropriate financial scheme, the kids head back to school, with a new teacher, Detective Harris, and desks encased in protective shields. Cartman seems a bit more paranoid than usual, which begs the question, “In South Park, in the middle of a deadly viral outbreak, what could possibly go wrong?”

With the exception of 2007’s epic three-part “Imaginationand” effort, South Park has never aired such a special episode. Season 24’s premiere has not yet been announced, but we assume Mr. Parker and Mr. Stone have gathered more than enough cultural and political fodder these days to fill any number of episodes.

With the launch of HBO Max and their gargantuan $500 million exclusive South Park North American streaming deal with ViacomCBS and South Park Studios, episodes of the show will be available in all sorts of places; all-new episodes will be available to stream in HD exclusively on South Park Studios, CC.com and the Comedy Central App immediately following the west coast airing and on HBO Max 24-hours after premiere. Audiences will have next-day access to new episodes, as well as the entire South Park library, across numerous internet-connected devices with an HBO Max subscription.