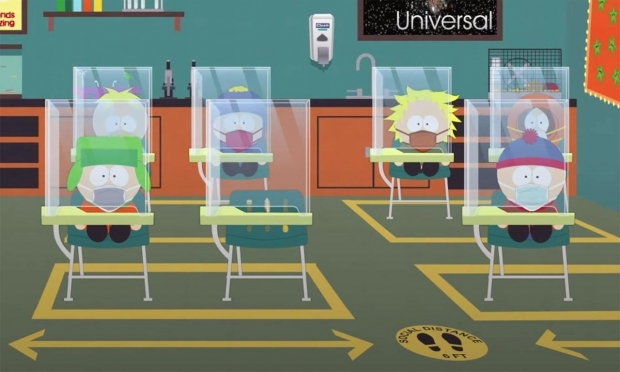 At long last, come February, South Park will be returning for its first new season since 2019.

Since the pandemic stunted the series’ production throughout 2020, its team decided to forego its weekly output and instead focus on making two hour-long specials. The first, “The Pandemic Special,” aired September 30, 2020, and the second, “South ParQ Vaccination Special,” debuted March 10, 2021.

Part of Parker and Stone’s $900-million-dollar deal with ViacomCBS’ MTV Entertainment Studios includes a commitment to produce 14 films set in the South Park universe for Paramount+. Two of those titles included “Post COVID” and “Post COVID: The Return of COVID” -- both of which landed on the streaming service last November and December, respectively.

“To be halfway done with South Park is a great accomplishment -- we can’t lie,” Stone and Parker said in a shared statement. Their recently inked agreement renews their iconic series until at least its 30th season.

Chris McCarthy, president and CEO of ViacomCBS Media Networks and MTV Entertainment Studios, added: “As part of our expansive new deal, we are thrilled to continue our partnership with them for many more seasons of South Park on Comedy Central and many more made-for-streaming South Park exclusive events on Paramount+.”

New episodes of South Park will be available to stream on SouthPark.cc.com, CC.com, and the Comedy Central App following their initial air dates.