Animated short directed by Marie-Christine Courtès shows the consequences of the Indochina War for a repatriated family who arrives at the transit camp of Saint-Livrade in France. 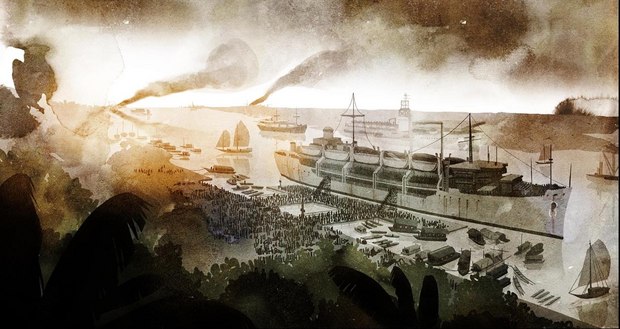 RENNES, FRANCE -- Vivement Lundi announced the official selection of Sous tes doigts, directed by Marie-Christine Courtèse, for participation in the Bronx International Film Festival, NY in January 2016 and Monstra Lisbon in March. This follows a special jury prize at Cinanima Espinho in November and the Audience award at AFCA French Animation Film Festival in December.

The animated short, Sous tes doigts, tells the story of the consequences suffered by a family repatriated after the Indochina War. The family arrives at the transit camp of Saint-Livrade in France where more than 1200 Indochinese stayed in 1956.

The day of her grandmother’s cremation, Emilie, a young mixed-race Asian girl, buries herself in her grandmother’s memories. She discovers memories of the Indochina of Hoa, her romantic encounter with Jacques (a French colonial), the birth of Linh (Emilie's mother) and her tragic departure to France in 1956. She relives with Linh, the arrival into the camp of Sainte-Livrade, the exploitation of the Indochinese women by the market gardeners of Lot-et-Garonne. Between memories, dance, anger and traditional rituals, Emilie learns to accept this heritage.

In writing the screenplay of her first narrative film, Marie-Christine Courtès drew inspiration from a documentary she directed in 2004, Le Camp des Oubliés, where she tells the story of the transit camp of Saint-Livrade and the forgotten women of the Indochina's War. By returning to this forgotten French Colonial History, Marie-Christine Courtès demonstrated the difficulty of accepting this symbolic heritage tainted by humiliation and hidden for decades in the collective memory.

Helped by Ludivine Berthouloux, Art Directror of the film, Marie-Christine Courtès worked with the cartoonist Marcelino Truong to create the characters. Frank2Louise composed the music and authored the choreography.